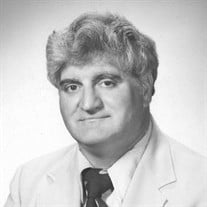 Anthony Robert Cecere,93, passed away peacefully at his home in Cliffside Park, New Jersey, Saturday, March 2nd, 2019 at 9:20 am. He was surrounded by his loving family at the time of his death. Anthony was born in Brooklyn, NY on October 19th, 1925. He moved to East Islip, NY at the age of 7 and graduated from East Islip High School in 1943. Shortly after graduation he entered the U.S. Navy, serving in the Pacific and elsewhere during the last years of World War Two. After his discharge from the Navy Anthony returned to New York and worked for his father Emil at the French Modes Costume Jewelry factories in East Islip and Manhattan. He married Gloria Ribeiro of Yonkers, NY in November of 1951. Subsequently he worked in various areas of the New York costume jewelry business and founded GTH Enterprises, Inc. and then the Avante Products Corporation; he served as a manufacturing consultant for the Avon Corporation and the Puerto Rican Development Agency during the 1970s. He served on the board of the Manufacturing Jewelers and Silversmiths of America,. He was granted three US Patents for his development of a vacuum system to improve a centrifugal casting system , another for automation of the centrifugal casting process and a third for the combination of the automated system and the vacuum process. These innovations represented a great technological advance for the costume jewelry industry. In his spare time Anthony loved to sail and to travel especially to Acapulco, Mexico. He demonstrated a prodigious mechanical genius from a young age, built his own sailboat from scratch at age 16, constructed and flew model airplanes, and was a talented sculptor and modelmaker. He loved nothing more than tinkering on his prized possession the AVANTE, a 45 foot sailboat built by Morgan. Anthony is survived by Gloria Daluz Ribeiro, his loving wife of 67 years, his four children Anthony Jr., Paul, Ann Marie, and Gloria, and his granddaughter Kiana Marie Boyle and his sister Mary Aichroth . He was preceded in death by his parents Emil and Anna Orifice Cecere, brothers Salvatore and Vincent and his sister Clementine.

Anthony Robert Cecere,93, passed away peacefully at his home in Cliffside Park, New Jersey, Saturday, March 2nd, 2019 at 9:20 am. He was surrounded by his loving family at the time of his death. Anthony was born in Brooklyn, NY on... View Obituary & Service Information

The family of Anthony R Cecere created this Life Tributes page to make it easy to share your memories.

Anthony Robert Cecere,93, passed away peacefully at his home...

Send flowers to the Cecere family.