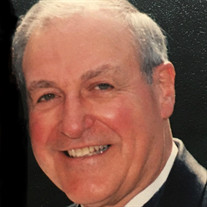 Aram Levon Varteresian, age 91 of Tenafly (and Demarest 1966-2017), passed away on Tuesday February 4th. Aram was born on February 20, 1928, in Brooklyn, New York, to the late Karnig and Verkine Varteresian. His parents immigrated to the U.S. from Bulgaria. He was baptized on July 4, 1928 at the Armenian Apostolic Church in Astoria, NY (I don’t recall the name). After receiving training and awards in cabinet making, he worked his entire career in retail jewelry sales; the majority was at a family owned jewelry store in Manhattan. Aram served his country in the U.S. Army National Guard and received an honorable discharge in June 1954. He was a devoted and loving husband, father, grandfather, son, brother, uncle, cousin, and friend. Aram was admired for his warm smile and demeanor, his good sense of humor and his genuine friendship. His interests and hobbies included woodworking, tennis, travel, attending Broadway shows, musical theater, concerts, and music appreciation. Aram was an active member of the St. Thomas Armenian Church in Tenafly from 1966 until the 1990s. He was very involved in the St. Thomas Men’s Club and met many of his lifelong friends there. Aram is survived by his wife of over 66 years, Mary Varteresian; his son and daughter-in-law, Gary and Seta Varteresian, River Vale; his son Carl Varteresian, West New York; his daughter and son-in-law, Dawn and Richard Emmet, Hillsdale; his grandchildren, Greg Varteresian, Andrew Varteresian and Melina Varteresian; and Greg’s mother, Sharon Shahinian, Hoboken. The family will receive family and friends from 3:00 – 7:00 P.M. at the funeral home on Friday, February 7. Memorial services are scheduled for 10:30 A.M. Saturday, February 8 at St. Leon Armenian Church, Fair Lawn.

Aram Levon Varteresian, age 91 of Tenafly (and Demarest 1966-2017), passed away on Tuesday February 4th. Aram was born on February 20, 1928, in Brooklyn, New York, to the late Karnig and Verkine Varteresian. His parents immigrated to the U.S.... View Obituary & Service Information

The family of Aram Varteresian created this Life Tributes page to make it easy to share your memories.

Send flowers to the Varteresian family.