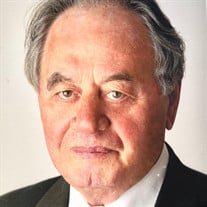 Aristides Duzoglou Dougos, defender of religious liberty and political freedom, civil engineer, developer, and entrepreneur passed away peacefully, August 17, 2021, at home surrounded by family. Born in Constanza, Romania, June 29, 1922, Aristides Duzoglou obtained his Civil Engineering degree at the Polytechnique of Timisoara, Romania and master’s degree at the University of Rome. The first in his family to leave communist Romania in 1947, Aristides emigrated to Venezuela where he brought his family and established multiple businesses and formed a construction company responsible for projects that built Venezuela’s infrastructure. He emigrated to the United States in 1963 where he formed Aris Estates a firm responsible for the investment, development, and management of real estate projects and properties in Bergen County, New Jersey. As a member of the Appeal of Conscience Foundation he worked unswervingly for freedom of religion. Aristides Duzoglou was decorated by the Greek Government with the “Medallion Timis”. In New York in 1971. he was honored as the “Man of the Year” in the annual Greek Independence Day Parade. He served as member of the Greek Orthodox Archdiocesan Council and in 1974 he was conferred the title Archon Maestor by His Eminence Archbishop Iakovos. Aristides Duzoglou Dougos is survived by his loving wife Gloria, and left a living legacy in his children Robert and Elena Duzoglou, their spouses Lori and Michael Sisti, his grandchildren Derek, Alexander, Jonathan, Morgan, Ariana and his great grandson, Mateo. May he rest in peace. . Visitation Thursday, August 19, 2021 at Barrett Leber Funeral Home 148 Dean Dr., Tenafly, NJ from 4-8 PM. Funeral service Friday, August 20, 2021 at 10 AM at St. John The Theologian Church, Tenafly, NJ. Interment Brookside Cemetery, Englewood, NJ.

The family of Aristides Duzoglou Dougos created this Life Tributes page to make it easy to share your memories.

Send flowers to the Dougos family.