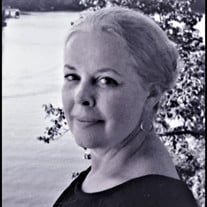 Barbara Soyster was born at Christmas in 1927 in the Bronx, New York to Mildred and William Weikert. Thereafter, Christmas Day was celebrated twice on the 25th: once with a Christmas tree and once with a birthday cake. Barbara's brother, John Weikert, joined the family three years later. After having graduated from The Katharine Gibbs School in Manhattan, she enjoyed working in the corporate world, culminating in many years spent as executive secretary to the chairman of Thomas J. Lipton Company. Barbara and Stuart Soyster were joined in a blessed marriage on November 5, 1949. For most of their more than 71 years together, they lived in Tenafly, NJ. Coincidentally, this was the town where Barbara's great-grandfather and grandfather lived in the 1800's. Their family grew as they welcomed Thomas William Soyster and, soon thereafter, Susan Elizabeth Soyster. The family spent many years of happy vacations along the New England coast. Barbara was a devoted grandmother (aka Nana) to four "grands," as she called them: Thomas, Jeffery, Mary and Chris. Barbara and Stuart always enjoyed entertaining friends, and Barbara's creative cooking talents led her to a career as a popular food professional known throughout the Metropolitan area. She studied in Florence, Italy with Giuliano Bugialli, as well as with celebrity food experts in this country. Her career as a Food Journalist grew as she assisted authors of major cookbooks for Random House and Doubleday. As a freelance writer, Barbara wrote food articles for HOUSE AND GARDEN magazine, THE RECORD and THE NEW YORK DAILY NEWS. Barbara and Stuart joined the congregation of First Presbyterian Church Englewood in 1951. Barbara was a much-loved and enthusiastic member of “FPC,” serving as an Elder, Clerk of Session for four years, President of its Mother's Club, and as a Church School teacher and department chair. She was also a dedicated member of The Woman's Club of Englewood, having served three times as its President and in various executive board positions. She was proudest of the Centennial Scholarship Fund she helped establish to provide financial aid to Englewood college-bound young women. Memorial Services to be announced at a later date.

Barbara Soyster was born at Christmas in 1927 in the Bronx, New York to Mildred and William Weikert. Thereafter, Christmas Day was celebrated twice on the 25th: once with a Christmas tree and once with a birthday cake. Barbara's brother, John... View Obituary & Service Information

The family of Barbara Soyster created this Life Tributes page to make it easy to share your memories.

Barbara Soyster was born at Christmas in 1927 in the Bronx, New...

Customized sympathy cards. Mailed for you.