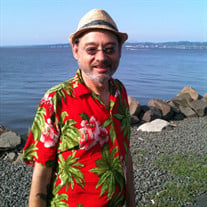 In lieu of flower's memorial donations in Barry's name would be appreciated. Gifts in Barry’s honor can be sent to: Clyde F. Barker Penn Transplant House c/o kirsten king 3940 Spruce Street Philadelphia, PA 19104 Checks are made out to: Trustees of the University of Pennsylvania, with Barry’s name and “Transplant House” in the memo line. Barry Watson Edge, aged 65, passed away peacefully in his sleep on the morning of January 24th in Englewood Hospital in Englewood, New Jersey. Barry was born on August 16, 1953 in Newnan, Georgia. Barry was known all over this country for his charm, wit, story-telling ability, his talent as a musician, and his compassionate listening. Barry produced albums, traveled the country by train and hitchhiking, published a dark comedy novel called Final Arrangements about the funeral business. In his lifetime, he was a funeral director, lead guitarist in the Imitators, an intake manager in a psychiatric hospital, a massage therapist, Hepatitis C advocate and a medical journalist for Health Union. Barry was most recently a member of All Saint’s Episcopal Church where he loved the pastor, the congregation and the liturgy. He is survived by his brother, Kirby Edge, his sons, Eliott and Maxwell Edge, and his loving wife, Marisa Moore. Friends, family and the public are welcome to celebrate his life at Barrett's Funeral Home, Tenafly, New Jersey from 4:00 pm to 7:00 pm on Tuesday, January 29th. Join us and remember what Barry used to say as he started his day at the funeral home - It is a great day to be alive. His funeral service will be held at All Saint's Episcopal Church, Leonia, NJ at 1:00 pm on Wednesday, January 30th.

The family of Barry Watson Edge created this Life Tributes page to make it easy to share your memories.

Send flowers to the Edge family.