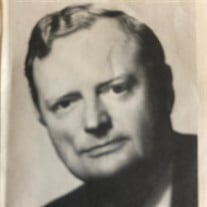 Cameron Dale Neulen, 93, a longtime resident of Tenafly, NJ, passed away July 1 at home. He was born September 10, 1926 to Marion Cameron Neulen and Dr. Lester N. Neulen, who later became Superintendent of the Teaneck School District. After graduating from Teaneck High School in 1944, Mr. Neulen enlisted in the United States Navy. After receiving an honorable discharge from the service, he enrolled in Princeton University, graduating in 1950, with honors and with a degree in Psychology. He was also a member of the Psychology Club at Princeton. He was first employed by the Vick Chemical Company and later he went to work for The McGraw-Hill Publishing Company where he was a District Manager. He was employed with McGraw-Hill for 45 years until his retirement. In 1965, Mr. Neulen married Patricia Roe at St. Margaret Church in Madison, CT. They celebrated their 54th anniversary last September 4. Mr. Neulen was an avid golfer and once shot a 69 and a hole-in-one on the same day at the Westchester Country Club. He was a member of the Board of Trustees of the Knickerbocker Country Club in Tenafly, where he was a long-time member. In addition to his love of golf, he was a lifelong fan of the St. Louis Cardinals baseball team. Mr. Neulen is survived by his beloved wife of 54 years, Patricia Roe Neulen, a nephew, Retired Marine Colonel Barry Neulen, of Alexandria, Virginia; niece, Brenda Kiely, of Culpepper, Virginia; and his sister-in-law, Ceil Diegmann, of St. Lucie West, Florida. In addition, survivors include nephews John Diegmann of South Windsor, Ct., Michael Diegmann of Enfield, Ct., Paul Diegmann of Chestnut Ridge, NY and Peter Diegmann of Scarsdale, NY., and nieces, Mary Nichols of Wethersfield, Ct. and Susan Sarazen, of Vernon, Ct. He was predeceased by his parents, his daughter Pamela, and his brother, John D. Neulen.

The family of Cameron D Neulen created this Life Tributes page to make it easy to share your memories.

Send flowers to the Neulen family.