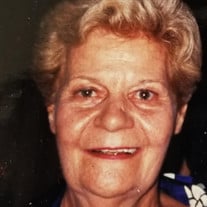 Carla Cohen, 91, a long-time resident of Englewood, N.J. passed away on December 31, 2018. Born in Feltre, Italy, on January 31, 1927, she was the youngest of five children. Her father, Francesco, was born in Verona, Italy and became a medical doctor who, during WWI, helped tend to wounded soldiers on the front lines at Monte Grappa. Her mother, Maria, was born in Mantova, Italy. Carla grew up in Feltre and attended the University of Padova. She graduated with a degree in literature and wrote her thesis on the plays of Oscar Wilde. In 1950, she was engaged to a Swiss engineer who fell to his death from a bridge in Switzerland, while overseeing the final stages of its completion. She moved to Switzerland after the accident, and while there, learned German fluently. Upon her return to Italy, she began teaching German at a middle school in Belluno, and in addition worked as an interpreter at the 1956 Olympics in Cortina D’Ampezzo. During her summer vacations, she traveled all over Europe to see her favorite actor, Laurence Olivier, perform in plays. In the spring of 1961, Carla met her husband, Sol, then the Vice President of Hudson County News. He was an American tourist, and they found themselves sitting next to each other on a train going to Rome. She was reading a book in German, and since Sol had learned German from his mother, he struck up a conversation with her. It was love at first sight, and they were married on July 22, 1961. Carla started her new life in the United States with her husband, and they had two daughters, Francesca and Mara. On March 23, 1971, Sol suffered a heart attack and passed away at the age of 57. After the death of her husband, Carla dedicated herself to raising her two young children and brought them to Italy every summer to share with them the beauty of her hometown of Feltre and the Dolomite mountains which surround it, and the experience of knowing her close friends and relatives. She also began working at The Italian Cultural Institute in Manhattan, and then later as a German teacher at The Elisabeth Morrow School. After her daughters left for college, Carla rekindled the passion for the theater which she had had as a young woman. Her admiration for the actor Jeremy Irons inspired her to attend his plays in New York, London, and Stratford-Upon-Avon. Carla was also an avid reader, loved the cinema, and enjoyed gardening. In Carla’s later years, her two grandchildren, Tommy and Caitlin, the children of Francesca and Jim, brought her immeasurable joy. She loved them dearly and was a great presence throughout their young lives. Carla is survived by her two daughters, Francesca and Mara, her two beloved grandchildren, Tommy and Caitlin, her son-in-law, Jim, as well as several nieces and nephews in Italy. Carla was predeceased by her husband, Sol, and her siblings, Franca, Nora, Gabriella, and Gabriele. The interment on Monday, January 7, 2019 will take place at Beth El Cemetery in Paramus, N.J. and will be officiated by Father Tom Jordan from St. Cecilia’s Church. This funeral service will be attended by close family members only. In lieu of flowers, memorial donations to Bright Side Manor in Carla’s name would be appreciated. (Bright Side Manor, 300 Teaneck Road, Teaneck, New Jersey 07666)

Carla Cohen, 91, a long-time resident of Englewood, N.J. passed away on December 31, 2018. Born in Feltre, Italy, on January 31, 1927, she was the youngest of five children. Her father, Francesco, was born in Verona, Italy and became a medical... View Obituary & Service Information

The family of Carla Cohen created this Life Tributes page to make it easy to share your memories.