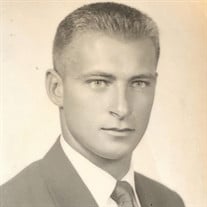 Aura-it is true that you know it when you see it and you can feel it, too. Charles Sisti: handsome, athletic, smart and nice he effortlessly shared his natural aura with everyone he met and it made people feel happy and loved, this was his signature gift. Charles led a beautiful and charmed life, never sick, always active and content. He peacefully and with dignity passed away with his wife, Emily, holding his hand and with his family at his bedside while overlooking the Hudson River he loved so much after suffering an acute hemorrhagic stroke 6 weeks prior. A proud product of his Brooklyn Italian-American upbringing, within a large extended and somewhat eccentric family, he was known as the golden boy although those words never passed his lips. His destiny was set at age 10 when he met Emily Lonardo in their East 3rd Street neighborhood, his only love, future wife and constant companion for the next 79 years. Charles proudly attended Brooklyn Technical High School, was a Coney Island lifeguard, aced the NYU School of Engineering on an ROTC scholarship and became a great civil engineer. During his service in the US Army Corps of Engineers he built public infrastructure projects in the mid-west which brought the conveniences of electricity and sanitation to thousands of poor Americans. But it was on the bedrock of Manhattan and in the waterways of New York that Charles found his calling. In steel, stone and wood he helped lay the foundations for skyscrapers, bridges and the NY State capital. His love of marine civil engineering led him to the last 25 years of his professional life with Eastchester Towing located on City Island. Charles, a possible misfit in the Bronx island haven of free spirits and iconoclasts being the quintessential straight arrow, he managed to charm all the Islanders with his aura and became an enthusiastic member of a beautiful new community. New York waters were a constant in Charles’ life. From Bay 9 at Coney Island to the caissons of the Throgs Neck Bridge, the barges and tugs of City Island and the Hudson River, the pristine white sand beaches of Jones Beach, Robert Moses State Park, Saltaire Fire Island and Flying Point Beach Water Mill, Charles was always moving east to seek the clearest water. His best engineering feat though was his family; Emily, Michael and Peter whom he always put first. Although he was blithely unaware of this, Charles was the"cool Dad" when coaching Little League or being the Scoutmaster of Troop 86 in Tenafly, NJ where both his sons became Eagle Scouts. Not surprisingly he was the father and husband that people looked up to and admired despite his not recognizing this. Charles and Emily were always together, unnaturally never having serious disagreements or being unpleasant to one another, and thus they set the standard of conduct and respect for his family, the gold standard of a good marriage. He lived to see his six grandchildren Alexander, Jonathan, Ariana, Julia, Olivia and Emma become accomplished young adults collecting undergraduate degrees in the arts, sciences and engineering as well as Master degrees in public health and science, PhDs in neuroscience, public health and MDs, all earned at the most elite universities in the country. His four great grandchildren, Milo, Naomi, Nathan and Anaïs were his greatest joy and fascination in the past few years giving him the opportunity to see that the future holds great promise. He was justifiably proud that his children and grandchildren put their educations to work serving the greater good, giving back to the country he felt gave him and his family so much. He was one of the very few people who could ever claim that he had both a son and a grandson that are neurosurgeons. A great friend and neighbor, Charles had his best smile on when he was helping people by being useful, answering technical questions, fixing malfunctioning anything, magically providing the essential tool just at the right time. Charles had no fear of strangers and wherever he went a common family refrain was, “Who is he talking to now?” Charles understood that these quiet, small acts of goodwill, kindness and friendship freely given are the basis of good citizenship and are the foundations of healthy communities. You rarely saw Charles outside on a sunny day without his Yankees cap on. Originating with his own father Michael he kept the family tradition of parking near Edgecomb Avenue and walking across the McCombs Dam Bridge initially to the House that Ruth built, and then to the New Yankee Stadium. These were the family’s best walks. Charles did have a beautiful and charmed life. Happiness is an elusive goal but his life is a testament to realizing this possibility, and that by developing a good character and making simple good choices, you can achieve a meaningful life, well-lived. Maya Angelou commented that in the end, people will forget what you say, people will forget what you did, but people will never forget how you made them feel. How true, Charles Sisti, while the golden boy with the magic aura will surely be missed, it is certain none of us will ever forget how loved he made us feel.

Aura-it is true that you know it when you see it and you can feel it, too. Charles Sisti: handsome, athletic, smart and nice he effortlessly shared his natural aura with everyone he met and it made people feel happy and loved, this was his signature... View Obituary & Service Information

The family of Charles Sisti created this Life Tributes page to make it easy to share your memories.

Aura-it is true that you know it when you see it and you can...

Send flowers to the Sisti family.