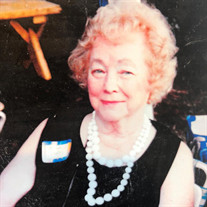 Doris M. Arnold, born March 20, 1920, passed away peacefully on March 3, 2020, after a long day with her daughter and son by her side. Doris is survived by loving son, Douglas (wife Donna), and loving daughter, Dori (husband Ken). She adored all her grandchildren and they adored her as well. Grandchildren include: Kimberly, Joe, (fiancé Michaela), Ericka, and Will. She was also blessed with 3 great grandchildren. Doris was also much loved by her late husband, the Honorable Wm J Arnold, her late son, Wm B Arnold, M.D., and her son, David. Doris was a loving, energetic, fun and creative woman. She lived her life with a positive attitude, fearless independence, and a “let’s try it” mantra, no matter how wild the idea. She was an innovator. As a young woman she was an athlete and an artist. She was accepted to Columbia University, but had to drop out after one semester to help support her family. She was a N.Y. designer and Freelance artist. She married Bill, whom she said looked like Ronald Reagan in the movies, and whom she met through her dear cousin at her beloved Lake Hopatcong. After she married, she continued her artwork, but also became a real estate sales person. She was an excellent landscaper and building constructor as well. She owned her own tree nursery for a time, and sold shrubs that landscaped many a house (all her children would eventually learn how to sell and plant trees for the sake of the business). Family was everything and her house became a home and a haven that she fiercely maintained. She was a past president of the American Legion auxiliary; a member of the Eastern Star; Girl Scout troop leader; she was on two bowling leagues, and built her own in ground pool so her children could learn to swim. She had a wonderful sense of humor and sometimes went to great lengths for a practical joke. She was the matriarch of the family, she was the rock and she will be greatly missed, but she built her family legacy on a strong foundation, and we will carry on. May she rest in peace till we all meet again. Family and friends are invited to visit at the Barrett Funeral Home, 148 Dean Dr, Tenafly on Monday, March 9, 4 - 8 PM along with a service taking place at 7:30PM.

Doris M. Arnold, born March 20, 1920, passed away peacefully on March 3, 2020, after a long day with her daughter and son by her side. Doris is survived by loving son, Douglas (wife Donna), and loving daughter, Dori (husband Ken). She adored... View Obituary & Service Information

The family of Doris Arnold created this Life Tributes page to make it easy to share your memories.

Send flowers to the Arnold family.