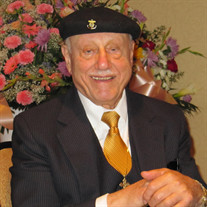 Edward Deeb, 95, of Mahwah and formerly of Tenafly, New Jersey passed away on May 31, 2018 surrounded by his family. Edward was born in Brooklyn, New York on February 11, 1923 and was the beloved husband of Florence Deeb (predeceased), his wife of 60 years, Edward Deeb, Jr. of Mahwah, Dennis Deeb (Cindy) of Albany, NY; Leslie Carter (Mark) of Mahwah; Gary Deeb (Karen) of Madison and Alison Olszewski (Stan) of Morristown and 10 grandchildren Caroline, Lauren, Alexis, Steven, Jaclyn, Alexandra, Andrea, Stephanie, Sarah and Eddie. Edward was the brother of predeceased Alexander Deeb and Violet (Deeb) Husni. Edward served his country in WWII with US Army’s 78th Infantry Division as Communications Sergeant serving from his induction in January 1943 to his honorable discharge on January 27, 1946. He was one of seven Founding Fathers of St. Anthony’s Orthodox Church (Bergenfield, NJ) where he served as Parish Council President and on the Building Committee. Edward and Florence met at St. Mary's Orthodox Church, Brooklyn, NY and the couple married on June 18, 1950. The couple moved from Brooklyn, NY to Demarest, NJ in 1952 and to Tenafly in 1958, where they resided nearly 40 years before retiring to Mahwah, NJ in 1997. Edward was a leader and pioneer in his Tenafly community serving on the Borough Council, the Board of Education, the Little League; the Citizens Advisory Committee and was Co-founder of Tenakill Swim Club. He also served the HOA Boards for Ramapo Ridge in Mahwah and Sandy Lane Estates in Ocean City, MD. Professionally, Edward fulfilled the American Dream as a professional in the construction industry for over 40 years working in the Mechanical Engineering and construction field with Kerby Saunders, Inc. of New York (a JWP Company). While employed he completed his undergraduate and graduate degrees with a Bachelor’s of Mechanical Engineering from Polytechnic Institute of Brooklyn and his MBA from New York University, respectively. He started first as a Designer Draftsman on November 3, 1952, and became President in 1982. He was a Professional Engineer licensed in New York as well as 5 other states. His company successfully designed, constructed and placed in operation the heating, ventilating and air conditioning (HVAC) for many New York landmark buildings including Madison Square Garden. His specialty included HVAC for major NY regional hospitals with a most memorable project for the air conditioning and remodeling of the Statue of Liberty, NY. Edward was a member of ASHRAE, ASME, was on the Panel of Arbitrators for the American Arbitration Association, was a member of the Trustee of the National Certified Pipe Welding Bureau, and was a member and Seminar Lecturer for the Mechanical Contractors Association of America (MCAA) and served on the Board of MCA-NY. Edward was most passionate about sailing and owned several sailboats during his lifetime. He sailed at Nyack Boat Club in the Lightning Fleet and ocean sailed his CSY-44 “Deebob,” in the British Virgin Islands and the Windward Islands of the Lesser Antilles. Edward will be remembered for his devotion and tireless care he provided to his wife Florence for 16 years after she suffered a stroke in 1995. He enjoyed building projects around the house as a do-it-yourself mechanic would fix and repair anything. He loved crossword and Sudoku puzzles, reading, playing hearts and a family card game ‘Basra.’ However, his greatest joy was spending time with family; his wife, children, and extended family. Family and friends are kindly invited to the Barrett Funeral Home, 148 Dean Drive, Tenafly, New Jersey on Sunday, June 3 from 2pm to 6pm. A funeral service will be held on Monday, June 4 at 10am at St. Anthony’s Orthodox Church, 385 Ivy Lane, Bergenfield, NJ. An Orthodox Christian burial will be in the George Washington Memorial Park, Paramus. In lieu of flowers, donations in his memory may be sent to St. Anthony's Orthodox Church – Building Fund, Bergenfield, NJ.

Edward Deeb, 95, of Mahwah and formerly of Tenafly, New Jersey passed away on May 31, 2018 surrounded by his family. Edward was born in Brooklyn, New York on February 11, 1923 and was the beloved husband of Florence Deeb (predeceased), his... View Obituary & Service Information

The family of Edward Deeb created this Life Tributes page to make it easy to share your memories.

Edward Deeb, 95, of Mahwah and formerly of Tenafly, New Jersey...

Send flowers to the Deeb family.