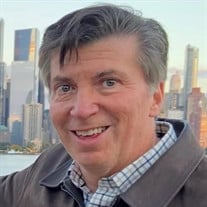 CLOSTER – Edward T. Rogan, 62, passed away peacefully at home surrounded by his family on December 25, 2021, of cancer. Ed was born on September 26, 1959 to Edward (Harvey) and Mary Rogan. He attended St. Cecilia High School, St. Thomas Aquinas College, and Pace University School of Law. Ed worked as a civil litigation attorney in private practice for 35 years and was recently honored with the distinction of Top Attorney of North America 2020-2021. A lifelong resident of Closter, Ed was actively involved in local politics. He was elected to serve as a Closter Councilman and then as Mayor, for 2 and 8 years, respectively. At the time he was one of Bergen County’s youngest Mayors. He was a member of the Closter Planning Board for 10 years and served on the Closter Board of Ethics as Chair. He most recently served as Borough Attorney of Closter for the past 17 years. Ed also served as the Closter Lion’s Club President. He was a member of the Belskie Museum Board, the Spectrum For Living Board, the Closter Nature Center Board, and the Closter Democratic Club. An ardent advocate for environmental and social initiatives, Ed pursued equal housing and clean-park policies that furthered the interests of Closter residents and all those who live, work, and serve in this community. Ed valued honesty and integrity above all. A member of the Church of St. Mary in Closter, Ed served as a Lector and Eucharistic Minister at the 5:00pm Saturday Mass for nearly 40 years. Ed was serving on the altar when he met the only love of his life, Carolyn (Zuleg) Rogan. They were later married on that same altar. In his spare time, Ed could be found playing with his dog Scout and grand-dog Riley, listening to Johnny Cash music, and rooting for mediocre sports teams, the Chicago Cubs and the Miami Dolphins. A longtime magician, Ed entertained many with his “Magic 4” All Occasions. Ed leaves behind his loving wife of 33 years, Carolyn. He was a devoted father to Kristina, Jacqueline, and Eddie. He was the beloved brother of Kathleen Olsen and Elizabeth (Betty) Gardner. He is lovingly remembered by his brother-in-law Ralph and wife Patricia Zuleg. Ed was the caring uncle of many nieces, nephews, and great-nephews. He was predeceased by his brothers-in-law Allen (Ron) Olsen and John Gardner, as well as his parents. Above all, his family was his pride and joy. Visitation at St. Mary Church, 20 Legion Pl, Closter on Thursday, December 30 from 4pm to 8pm. Funeral Mass at St. Mary on Friday, December 31 at 10am. Interment will be private. A ceremony honoring Ed’s contributions to Closter will be held in Spring 2022. In lieu of flowers, donations may be made to the Closter Volunteer Fire Department, Closter Volunteer Ambulance Corps, or St. Jude.

The family of Edward T. Rogan created this Life Tributes page to make it easy to share your memories.