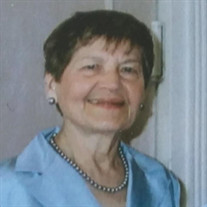 Eleanor Gertrude Smith Beloved mother, sister, aunt, mother-in-law, and grandmother, Eleanor Gertrude Smith, passed away on Sunday, March 1, 2020, at the age of 97. She was a longtime resident of Bergenfield, New Jersey. Eleanor was born in 1922, in New York City to the late Ernestine and Max Gieseler and grew up on the Upper East Side of Manhattan, with her brother, Richard. She married the late Douglas Vincent Smith in 1947 and moved to Bergenfield, New Jersey, where she lived for over 60 years. There she raised her three beloved daughters, Christine, Judi, and Marjorie, along with their dog, Cindy, and an assortment of other pets. Before marriage, she worked at Sears Roebuck and Company as a supervisor of administrative staff. After the death of her husband Douglas in 1968, with three daughters to raise on her own, Eleanor bought a typewriter and took evening typing classes. Through pure determination she managed to get back into the workforce, first landing a job at Domestic Lace. She then advanced to Safeco Insurance Company as a surety bond administrator, where she worked for over 20 years. During her time at Safeco, Eleanor was awarded the “Employee of the Year” in 1988. Eleanor was a fiercely independent person with a joy and zest for life. Two of her passions were sewing and cooking. Her Sunday afternoon roasts will be long remembered. She enjoyed good food, wine, and the occasional scotch. She also loved to travel, visiting Mexico, Canada, and, while in her 70s, Chile, in addition to going out west and to New England. She especially loved spending time with her family, enjoying the theater, concerts, restaurants, or going for walks in gardens or for swims at the beach. Eleanor was never one to sit out a dance. Also very dear to her heart, was the River Edge Women’s Club. Eleanor was an active member for 35 years. She held the positions of Chairperson for various committees, Recording Secretary, and President from 2000-2002. The Women’s Club was a large part of her life after retirement. She took pride in the club’s charity work and valued the close friendships forged with fellow club members. Eleanor was preceded in death by her husband, Douglas Smith, her brother, Richard Gieseler, and her sister-in-law Mary Gieseler. She is survived by her three devoted daughters, Christine Hurley, of Princeton, New Jersey, and her husband Ronald Hurley; Judith Buttke of Simi Valley, California, and her husband Kenneth Buttke; and Marjorie Smith of Arlington, Massachusetts, and her husband Steven Kaufman. She also leaves her grandchildren Elizabeth, Ian, and Collin Buttke, and Emily Smith-Kaufman, and her loving nieces, Barbara Gieseler and Janet Johnston. All will miss her dearly. Friends and relatives may pay respects at the Barrett Funeral Home, 148 Dean Drive, Tenafly, NJ, on Sunday, March 8, 2020, from 2 - 6 PM. There will be a funeral service, also at Barrett Funeral Home, on Monday March 9, 2020, at 11 AM. Burial will be at Mt. Hope Cemetery followed by lunch. If you would like to make a donation in Eleanor’s name, it can be made to: The Women’s Club of River Edge, PO Box 417, River Edge, NJ, 07661

Eleanor Gertrude Smith Beloved mother, sister, aunt, mother-in-law, and grandmother, Eleanor Gertrude Smith, passed away on Sunday, March 1, 2020, at the age of 97. She was a longtime resident of Bergenfield, New Jersey. Eleanor was born in... View Obituary & Service Information

The family of Eleanor G Smith created this Life Tributes page to make it easy to share your memories.

Send flowers to the Smith family.