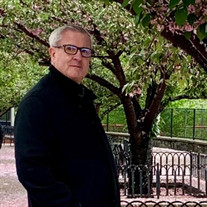 Eugene Thomas Lynch died in the early morning hours on January 23rd after a long brave battle with cancer. A current resident of North Bergen, NJ, Gene was a long-time resident of Briarcliff Manor, New York, born in New York City and raised in Levittown, NY. He leaves behind his devoted wife of 27 years, Eileen nee Brennan, his beloved daughter Jessica, and his dear son Owen. Gene was predeceased by his father Eugne A. Lynch, and leaves behind his mother Sarah Lynch nee Hughes. He was blessed with a large loving family of siblings Mary Lynch, Thomas (Cathy), Daniel (Annie), Sarah Siemers (Todd), Theresa Ferrari (Donald), and Christine Campa (Scott). He was predeceased by his sister Catherine. He cherished his many beloved nieces and nephews. His friendships were important to him. His warmth, openness, and hysterically funny antics are imprinted on the hearts of all who knew and loved him. Educated at St. Pius X and SUNY Oswego, Gene enjoyed a career as a Sales Trader that spanned over 40 years and two coasts. Most recently he was a Senior Vice President at Wall Street Access in New York. As a father, he was alway encouraging, supportive and gentle. As a human being, he had an affinity for the suffering and downtrodden. His most treasured asset in life was his family, who will miss him beyond measure. Despite his career in finance, Gene was a creative person. He was an avid reader with an affinity for mysteries. He had a deep appreciation for and an eclectic taste in music. He loved films and even produced a small number as a hobby earlier in his life. Gene also had a pretty respectable knowledge of Modern Art. Anyone who knew Gene, even peripherally, knew of his big love for sports. He was a coach to many and a fan of Army Football, the Jets and Mets. Those who knew Gene well will inevitably spend much more time laughing over his life and times, for now we feel a depth of loss that is difficult to express in words. Memorial visitation will be held at Barrett Leber Funeral Home 148 Dean Dr., Tenafly on Thursday, January 27, 2022 from 4- 7 PM. Memorial Mass, Friday, January 28, 2022 at 12 PM at Mt. Carmel Church, Tenafly, NJ. Inurnment to follow at Madonna Cemetery, Fort Lee, NJ. If you are unable to attend the Funeral Mass for Gene, it will be live streamed at Our Lady of Mt. Carmel Facebook Page: https://www.facebook.com/olmctenafly/

The family of Eugene Lynch created this Life Tributes page to make it easy to share your memories.

Customized sympathy cards. Mailed for you.