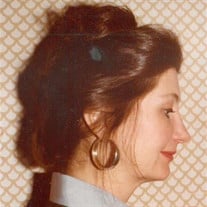 Frances Amanna died on February 27, 2019. The cause was lymphoma. Fran was born in Brooklyn, NY, and always held fond memories of those years growing up in her favorite borough. She graduated from Fontbonne Hall Academy in Brooklyn’s Fort Hamilton neighborhood, and then Columbia University. Fran was an accomplished curator and framer of fine art and for many years worked at galleries in northern New Jersey. She was a volunteer at the Women’s Rights Information Center in Englewood, becoming one of its key members beginning in its formative years in the 1970s. Fran also was among a group of friends who worked to revive Flat Rock Brook Nature Center – among other things, organizing fund raisers and on a few occasions arranging for the wonderful Pete Seeger to perform for audiences that filled to overflowing and especially thrilled the children. Fran was born an avid reader with wide-ranging interests, including art, history, music, novels, mysteries, and more. She had a remarkable ability to recall what she had read even long ago. She had a love of theater, film, ballet, opera, and – with an assist from her son – became a jazz fan with a deep appreciation of that music’s best players. Fran also was an extraordinary cook. She had the skill and grace to present a meal as if it were something she had just whipped up. She was a most gracious hostess. Early on, Fran showed a talent for friendship that lasted until her final days. Her friends were devoted to her as she was to them. “I am blessed,” she would say so many times, “to have such dear and wonderful friends.” She was modest, loving, generous, loyal, with a sense of humor and a natural kind of elegance that came easily. She also had a courage that got her through some of life’s most difficult moments. She was goodness personified, always with thoughts of others first, even to the end, concealing her sickness as long as she could in order “not to burden my family and friends.” The outpouring of love for her is a great comfort to her family. Still, this attempt to sum up the essence of our dearest Fran is bound to come up short. There is simply no way to describe adequately this very special person. Fran is survived by her husband, Bill, her son Billy and daughter-in-law Jenny (whom she thought of more as her daughter than her daughter-in-law,) and her sister, Barbara Griner. There will be a funeral Mass at 11:00 a.m. Saturday, March 9, at St. Cecilia Church, Englewood, NJ. In lieu of flowers, Fran’s family asks that donations be made to The Carmelite Missions, whose priests and other workers live among and serve the poor in areas where help is most needed. The address: The Carmelite Missions, c/o St. Cecilia Church, 55 West Demarest Avenue, Englewood NJ, 07631.

Frances Amanna died on February 27, 2019. The cause was lymphoma. Fran was born in Brooklyn, NY, and always held fond memories of those years growing up in her favorite borough. She graduated from Fontbonne Hall Academy in Brooklyn&#8217;s... View Obituary & Service Information

The family of Frances Amanna created this Life Tributes page to make it easy to share your memories.

Send flowers to the Amanna family.