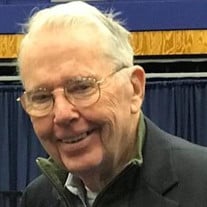 George Patrick Farley, 82, of Tenafly, NJ, a successful businessman, Army veteran and devoted family man who encouraged those he loved to think for themselves, embrace adventure, engage in community and love fiercely, passed away peacefully at his family home surrounded by his loved ones on Sunday March 28, 2021. He will be lovingly remembered by his wife of 54 years, Anne Marie Farley; six children, Matthew, Kristen (Miehle), Carolyn (Barrows), Patrick, Elizabeth (Hartnett) and Thomas; 13 grandchildren, and his brother, Harold Dennis. He was preceded in death by his cherished parents, George and Ann Farley; his sister, Ann, and his brother, Dan. Born in Brooklyn, NY, George was raised in Titusville, PA from the age of 7. It was there that he developed his strong work ethic, spending long hours working at the local pharmacy and graduating from Titusville High School. A certified public accountant, George held a bachelor’s degree in accounting from St. Bonaventure University. His career took him back to New York City, where he worked for the public accounting firm of Seidman & Seidman (BDO Seidman) for more than 30 years, rising to the position of partner. It was at St. Bonaventure that George realized his dedication to service to his country, enlisting in the Army ROTC. At the age of 27, he met the love of his life, Anne Marie Pfeifer, at Charlie’s, on the corner of 43rd Street and Vanderbilt Avenue in New York City. He often recounted to his children that he knew on that night that he would marry Anne and they would spend their lives together. George and Anne began their life together in Stuyvesant Town. It was there that they welcomed their six children. Always one for adventure, George spent the early years of his family life introducing his children to all his favorite places in his beloved city. Weekends would be spent at museums, Central Park, dining out and then finishing with ice cream at Rumpelmayer's. While living in New York City, George was an active member of the University Club, which he joined in 1964. An avid Bridge player, George enjoyed playing Bridge and socializing with other members. He spent many years competing in — and winning — community Bridge tournaments. After celebrating the birth of their sixth child, George and Anne made the decision to move their family to Tenafly, NJ. It was in Tenafly that George really began to effect change within the community. Almost immediately upon arrival in Tenafly, he became involved in the Biddy Basketball Community, helping to create a girls’ youth basketball team that would, in less than three years, develop into state champions who were invited to compete in a national tournament in Abbeville, Louisiana. George also helped mentor youth by coaching them in several other sports. It was in Tenafly that George celebrated each of his six children as they graduated from local high schools and moved on to attend college. There is nothing that brought George greater joy than being involved in the lives of his 13 grandchildren. In 1997, George and Anne purchased a home near the beach on Hilton Head Island in South Carolina. It was there that George most enjoyed celebrating his grown children and enjoying his grandchildren, spending hours at the pool watching his grandchildren learn to swim, dive and play games. At the beach, he taught his grandchildren to ride bikes and the waves. He loved to fish and boat and watch the sky. He taught his grandchildren to appreciate a sunny day, melting ice cream and music in the air. On Hilton Head, George valued both the raucousness of a large, loud, loving family and the sanctity of a lone walk on the beach or a quiet afternoon on the porch. “From him I learned the very underrated skill of thinking,’’ recalled one of his children. “He never gave me direct answers. He made me think for myself, and from that I learned to make my own choices and form my own opinions. We didn’t always come to the same conclusion or agree, yet he allowed me to walk my own path with all his love and support. His strength was unmatched, and he has left a larger ripple in this world than any human I have ever met. I was able to be brave and take risks because I knew I always had a safe place to land." George’s family viewed him as a “mountain, a giant, a force,’’ to which no other compared. Friends and family lovingly referred to him as “Big George” and would often come to him for advice on personal and business matters. George was truly blessed to have lived a full and long life, having felt deeply loved by those who knew him. He accomplished his true desire to spend his life with his wife, raising his children and watching his grandchildren thrive. At the end of his life, George was able to rest in peace, knowing that he had lived life to the fullest, fighting to the very end to be present for those he loved. He was blessed to be surrounded by his family at the end of his life. His family was truly blessed to be able to honor his life at a private family service shortly after his passing. Plans are being made for a celebration of George’s life on Friday, June 18, 2021, in Tenafly.

George Patrick Farley, 82, of Tenafly, NJ, a successful businessman, Army veteran and devoted family man who encouraged those he loved to think for themselves, embrace adventure, engage in community and love fiercely, passed away peacefully... View Obituary & Service Information

The family of George Patrick Farley created this Life Tributes page to make it easy to share your memories.

Send flowers to the Farley family.