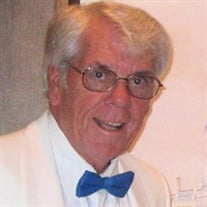 George Hector Fanjoy Milne, age 94, devoted husband of 52 years to Carolyn Wiseheart Milne died peacefully at his home in Englewood, New Jersey in the early morning of December 29, 2020. George was born November 23, 1926 in Nova Scotia, Canada. He graduated from McGill University with degrees in Mechanical Engineering and Commerce. He celebrated a successful career in accounting and finance at multiple companies including Xerox, Scholastic Magazines, and IPCO Hospital Supplies. He proudly became an American citizen in 2002. A pillar of the Englewood community since 1969, George was an influential member of many organizations including The First Presbyterian Church of Englewood, The Englewood Rotary Club, The Flat Rock Book Nature Center, The New York Botanical Garden, The Bergen Family Center, The Elisabeth Morrow School, and The Dwight Englewood School. George was a member of many social organizations including The New York Yacht Club, The Palisades Yacht Club and The Englewood Field Club. He and Carolyn traveled extensively visiting almost every continent in the world. He was a chef extraordinaire with specialties ranging from flaming crepe suzette to his lobster dinners, hosted with Carolyn on their back deck. They were avid boaters with a sailboat and motorboat docked at the Englewood Boat Basin for decades. So many individuals enjoyed cruises along the Hudson with Captain George. George had a particular zest for life… one of his favorite phrases: “The best is yet to come.” With you gone, George, it’s a little hard to swallow… but, with your spirit in us, the future will be bright. Above all George had passionate love for his family, he was our anchor. He is survived by his beloved wife Carolyn and six children: Mary (husband Lee Pillsbury), Jim, Cathy (husband Steven Nieberding), Malcolm (wife Britt), Christopher (wife Barb) and Elizabeth. He was Grampy to ten grandchildren and five great grandchildren. He is preceded in death by his first wife Pauline Campbell Milne and his brother James Burpee Milne. While he was our anchor, he taught us all to sail free and to sail in formation when needed. George was the epicenter of every room he entered. He loved without judgement and had an ability to bring people together. He was full of wit and wisdom and a master of debate. Somehow after spending time with George you challenged your own ideas and you felt smarter. He gave you a sense of self-reflection which made you grow as a person with a better understanding of yourself and our world. George will be interred in First Presbyterian Church Memorial Garden. Donations in George’s memory may be made to The First Presbyterian Church of Englewood. We will be hosting a Memorial Service January 23 at 2pm ET available online at fpce.live.

The family of George Milne created this Life Tributes page to make it easy to share your memories.