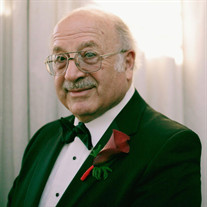 KERGE, James, of Tenafly, passed away peacefully on Thursday, August 22, 2019. He was the devoted and cherished father to daughters Kathryn Kerge-Couch and her husband Mark Couch of New York, NY and Susan Kerge Scherman and husband Jason Scherman of Tenafly, NJ and the beloved grandfather to Juliet Ramsey and Jason James Scherman. Born in 1942 in Brooklyn, New York to parents James and Nedda Kerge, James grew up in Tenafly NJ, and graduated from Tenafly High School in 1959. He attended Lafayette College, graduating in 1963, and then moved to Biloxi, Mississippi where he began his active service as an officer in the United States Air Force. It was in Biloxi that he met his wife of 47 years, Martha Bickerstaff Kerge. They married in 1969 in Gulfport, Mississippi and returned to Tenafly where he lived for 50 years. In New Jersey, he worked for 35 years in the Aerospace division of Honeywell International, Inc. and also took over as owner of Kerge Realtors in 1975 where he served as a real estate Broker for both the Tenafly and Cresskill, NJ offices. He was a dedicated member of the Presbyterian Church at Tenafly and served as a Trustee, Elder and member of the Session. He also was an active member of the Tenafly Republican Club, most recently fulfilling the role of Treasurer, and served in other roles for various community organizations. James also proudly served his country as an officer in the United States Air Force for more than 30 years. He served on active duty for five years as a communications electronics officer, completing his final active assignment as the Chief of the Telecommunications Branch at Ubon Air Force Base in Thailand during the Vietnam War. He joined the Air Force Office of Special Investigations Reserve Program in 1969 and served in multiple capacities, including as IMA to the Director of Investigative Support and later as IMA to the Deputy Commander for Operations. In that position, he headed the Headquarters AFOSI Reserve Program and was also involved in early planning for Operations Desert Storm/Shield. He retired as a Colonel from the Air Force Reserve on May 1, 1994. Military decorations included the Air Force Meritorious Service Medal and the Presidential Unit Citation. Memorial visitation will be held at Barrett Funeral Home, 148 Dean Drive, Tenafly, on Sunday, September 8 from 3-6 PM. A memorial service celebrating his life will be held at the Presbyterian Church at Tenafly, 55 Magnolia Avenue on Monday, September 9, at 11:00 AM. In lieu of flowers, donations may be made to the Tenafly Presbyterian Church, Memorial Fund, 55 Magnolia Avenue, Tenafly NJ 07670. For directions visit www.barrettfuneralhome.net.

KERGE, James, of Tenafly, passed away peacefully on Thursday, August 22, 2019. He was the devoted and cherished father to daughters Kathryn Kerge-Couch and her husband Mark Couch of New York, NY and Susan Kerge Scherman and husband Jason Scherman... View Obituary & Service Information

The family of James Kerge created this Life Tributes page to make it easy to share your memories.

KERGE, James, of Tenafly, passed away peacefully on Thursday,...