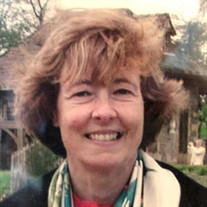 Jane Anne Majeski passed peacefully in her New York apartment on October 15, succumbing to leiomyosarcoma, a rare and aggressive form of cancer. She had been diagnosed with the disease in 2009 and given less than a year to live, but managed to defy the dire prognosis with a combination of discipline, willpower, and stoicism, characteristics that guided her life for 67 years. Jane came into the world on November 3, 1952, the first-born child of John and Vivian Majeski. She was a high-energy child from birth, rarely sleeping and, as soon as she was able, struggling, and often succeeding, to escape from the confines of her crib. At an early age, with the encouragement of her doting parents, she channeled her boundless energy into academic pursuits, reading voraciously and pestering grownups with endless questions. She excelled academically at every level, from grade school through high school, where she was selected to appear on the popular quiz show, “It’s Academic” and graduated at the top of her class. In 1974, she graduated cum laude from Smith College with a major in medieval history. Her academic proficiency was matched by an adventurous spirit and an unquenchable curiosity about the larger world. The summer of her junior year in high school was spent as an exchange student in Buenos Ares, and during her college years, she studied in Italy and England. Upon graduating, her first job was at Saturday Review magazine, where she worked closely with its editor, Norman Cousins. She then moved to Cambridge University Press, where she applied her academic training editing scholarly texts. The work aligned closely with her personal interests and provided a sense of satisfaction, however, her strong pragmatic streak rebelled against the meager compensation. “Reinventing herself” in 1979, she enrolled at Columbia University’s business school, and eighteen months later, as a newly minted MBA, began work as an investment banker at Lehman Brothers. Her nearly four-decade career in finance included stints at Swiss Bank, Dresdner Bank, and the Federal Reserve during which she advised on IPOs, constructed tax shelters, managed loans to major telecom companies, and regulated banks. Her financial acumen led her neighbors on 55 Central Park West to tap her for several terms as president of the Co-op board. Commercial success was only a part of Jane’s multi-faceted life that included wide ranging extra-curricular interests, an extended network of close friends, and a tight bond with her brothers Brian and Paul, their wives Diane and Jane and their children. A float trip down the Grand Canyon sparked an interest in white-water kayaking, which she pursued with characteristic zeal—first mastering the basics in the Columbia University swimming pool, eventually graduating to tackling some of the world’s most challenging rivers in South America and the Western United States. Intrigued by space exploration as a child, she signed up for a “round the world” tour of historic space sites, including stops at Cape Canaveral, NASA’s Houston headquarters, and the Baikonur Cosmodrome in Kazakhstan, the site of the Russian space program. In between, she managed trips to Egypt, Armenia, South America, China, and Europe. At home in New York City, she was an enthusiastic patron of the theater scene, attending performances regularly and serving on the board of the Cocteau Theater Company. She was also a member of the Archeological Society. With her generosity of spirit and loyalty, she accumulated a collection of life-long friends from all her pursuits—Smith friends, kayaking friends, Cambridge friends, banking friends, and a sprawling network of “friends of friends.” Throughout her life, she mirrored her parent’s independent spirit, doing what she wanted, going where she wanted, never concerned about the approval or opinion of others. In the years following her cancer diagnosis, Jane underwent over a dozen major surgeries and grueling chemo and radiation treatments without a complaint. She managed to shrug of each treatment as a temporary inconvenience, barely slowing down her active life. Only in the last five months, did the cumulative effects of the cancer and the intrusive treatments begin to take their toll. She is survived and grieved by a loving extended family: her brother Brian, his wife Diane, their children, Katherine and Cara, her husband Charlie and their children John and Katherine; brother Paul and his wife Jane, and their children Paul, his wife Kady, and their sons Teddy and Mac; Will and his wife Claire; and Tom and his partner Laura.

Jane Anne Majeski passed peacefully in her New York apartment on October 15, succumbing to leiomyosarcoma, a rare and aggressive form of cancer. She had been diagnosed with the disease in 2009 and given less than a year to live, but managed... View Obituary & Service Information

The family of Jane Anne Majeski created this Life Tributes page to make it easy to share your memories.

Send flowers to the Majeski family.