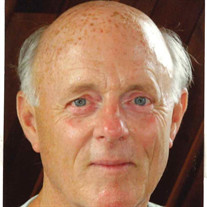 Jeffrey C. Mathieu, 74, of Edgewater, died Friday, January 17, with his beloved wife of nearly 40 years, Margaret (Peggy Parke) Mathieu, at his side. Born to the late Joseph W. and Elizabeth Carver Mathieu on October 13, 1945, in Trenton, Jeff grew up in Newtown, PA, where he graduated from Council Rock High School in 1964. Jeff was a man of boundless energy, enthusiasm, and talent. A devoted husband, brother, uncle and friend, he loved life and all it had to offer. A graduate of Penn State University (1968), his degree in Communications served him well. Jeff pursued a multifaceted career in broadcasting as well as enjoying interests in music; playing the guitar and singing professionally with several groups including “Satan and the Angels,” and entertaining listeners as a radio disc jockey and on-air personality in several major markets. Jeff was a nationwide consultant to radio stations and broadcast syndication companies including Bonneville, ABC Radio Networks, and Sony World Wide. Jeff also stayed busy as a licensed realtor and property management entrepreneur. In later years, he took on ever-increasing projects with Daibes Enterprises. Real estate and development opened the door to a long relationship with the New Jersey Builders Association (NJBA) where he served as a Life Director and was inducted into the “Builder Hall of Fame” in 2006. Jeff was a four-term Chairman of the Board, two-term President, and Life Director for the Builders Association of Northern New Jersey (BANNJ), where he was named Builder of the Year in 2003. In his spare time, Jeff enjoyed supporting the community and served as President of the Corporation for Edgewater Presbyterian Church, was a member of the session for the Presbyterian Church at Tenafly, and served as Trustee, New Jersey Builders Association Foundation for Housing. He served on the Edgewater Planning Board and, most recently, held a position on the Zoning Board. In addition to Peggy, Jeff is survived by his brother John Mathieu (Karen) of Stockton, and sisters Susan Madar (the late George) of Devon, PA and Barbara Crawford (Robert) of Chester, VT. He also is survived by sisters-in-law Susan Norton (Charles) of Wanaque, and Sally Busam (partner Greg) of Oak Ridge. Jeff was a devoted son-in-law of the late John and Irma Parke of Westwood. Jeff was a proud uncle to Laura Hume (Robert), Richard Parke (partner Laura), Jack Parke (Anna), Jennifer Varelas (Jon), Douglas Busam (Janice), Jill Robinson (Jack), Zachary Crawford (Katie), Kate McCallister (Greg), Meg Crawford, Jordan Crawford, Sasha Mathieu, and 14 wonderful great nieces and nephews. The family will welcome visitors to the Barrett Funeral Home on Tuesday, from 4-8 pm. A memorial service will take place in early March. In lieu of flowers, the family would encourage those who wish to honor and recognize Jeffrey’s life by making a memorial gift to the Salvation Army Greater New York, 120 West 14th Street, New York, NY 10011 or at salvationarmyny.org/Jeffrey, The Presbyterian Church at Tenafly, 55 Magnolia Ave., Tenafly, NJ 07670, or a charity of your choice.

The family of Jeffrey C. Mathieu created this Life Tributes page to make it easy to share your memories.

Send flowers to the Mathieu family.