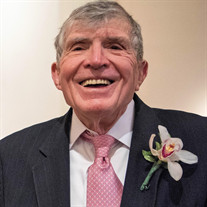 Longtime Tenafly resident Jack Kenny passed away peacefully at home on September 22, 2018. Jack and his wife Mae met in Rockaway Beach in 1955, married in 1958 and moved to Tenafly in 1962, remaining there in retirement after raising five children. Jack was born in Woodside, Queens (St. Teresa’s) to his Irish-born (County Roscommon) parents Beatrice and Patrick Kenny on September 23, 1933. He was deeply proud of his Irish heritage and Woodside roots. A Korean War veteran of the U.S. Army and a graduate of St. John’s University, Jack worked for the Colgate-Palmolive Co. for 26 years. After retiring he fulfilled a long-held ambition to become an attorney, graduating from Rutgers Law School in 1993. He then practiced law for 6 years, 3 of them in the Brooklyn District Attorney’s office as an Assistant District Attorney. Jack was an avid runner, starting during the running boom in the early 1970s and continuing into his late 70s, with six marathons among his many races. He is survived by his wife of 60 years Mae (Mary McCormick), their children Eileen, Brian (Katie), John (Mary Beth Hogan), Kathleen Jaeger (Robert), and Sheila (Jonathan Simmons) and grandchildren Molly, Brendan, Hugh, Cormac, Daniel, Kate, Jack and Declan. He is also survived by his sisters Mary Thomas and Kathleen Kennedy and brother Thomas, and sisters-in-law Eileen Walsh and Maureen Kenny. His brother Pat died three weeks prior to Jack. Visitation at the Barrett Funeral Home, 148 Dean Dr., Tenafly on Wednesday from 2-4 PM and 7-9 PM. Funeral Mass, Thursday, 11 AM at Mt. Carmel Church, Tenafly. Interment Mt. Carmel Cemetery, Tenafly. In lieu of flowers donations may be made to the Sisters of Saint Dominic of Blauvelt, NY, 496 Western Highway, Blauvelt, NY 10913, Attn: Development Office, or The Dominican Sisters of Sparkill, 175 Route 340, Sparkill, NY 10976.

Longtime Tenafly resident Jack Kenny passed away peacefully at home on September 22, 2018. Jack and his wife Mae met in Rockaway Beach in 1955, married in 1958 and moved to Tenafly in 1962, remaining there in retirement after raising five children.... View Obituary & Service Information

The family of John J. (Jack) Kenny created this Life Tributes page to make it easy to share your memories.