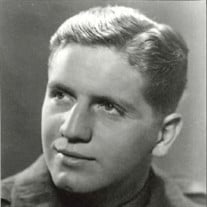 John Michael Khoury February 8, 1924 - March 7, 2020 Born in Brooklyn to Syrian immigrants, Michael and Marie Khoury, John and his three younger siblings lived in a brownstone on 48th Street. After graduating from Manual Training High School in 1941 John went on to Columbia University where he played football. The United States entered WWII and, like many young men his age, he was called to active duty. He served in the US Army from 1943 to1946. He fought with the 7th Army in France and Germany as a sniper and rifleman in L Company, 100th Division, 399th Infantry Regiment. He remained in Europe following the war with the Army of Occupation. He was awarded the Combat Infantry Badge, Bronze Star Medal with Oak Leaf Cluster for valor, Presidential Distinguished Unit Badge, Good Conduct Medal, European Theater Medal with Three Battle Stars, American Theater Medal, Army of Occupation Medal-Germany, and Victory Medal. He described his view of war from the foxhole in his book, Love Company, hoping “to fulfill an obligation to honor, in a small way, the men of my generation.” Upon his return he joined his father in the family textile import business, married his childhood neighbor, Grace Magrabi, and later moved to Tenafly with his growing family. In 1993 they moved to a condo in Harrington Park. He and his brother Russell continued to run the family businesses until his retirement at the age of 85. In addition to overseas travel for business, he and Grace traveled with their four children throughout the United States, to Canada, Europe and the Middle East. In the 1990s John and Grace retraced the route through France and Germany that John had taken as a young soldier during the war. John was a lifelong learner, keeping up with world events until the very end. He encouraged and supported his children and grandchildren in their studies. He was devoted to his wife and family. He served his country in its time of need. His was a life well lived. He is predeceased by his wife of 68 years, Grace, and his sisters Yvonne and Claire. He is survived by his children Diane Khoury and husband Steve Seyboth, Jeanne Lambert and husband George, Carol Khoury, John Khoury and wife Christiane, grandchildren George and Danielle Lambert, Mark and Nicole Khoury, his brother Russell and family. Well done, good and faithful servant! In lieu of flowers donations may be made to The Presbyterian Church at Tenafly or The Salvation Army.

The family of John M. Khoury created this Life Tributes page to make it easy to share your memories.

Send flowers to the Khoury family.