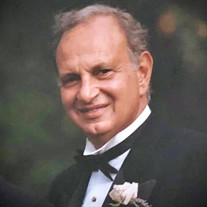 John Fred Malhame, age 81, of Englewood Cliffs, New Jersey, departed this earth on December 5th, of complications from a head injury he sustained one week earlier at the family’s farmhouse retreat in Hudson, NY. He was in the arms of his loving and devoted wife, and his eldest son. John was raised in a Lebanese neighborhood of Bay Ridge, Brooklyn. He graduated from Poly Prep Country Day in 1956, where he was an outstanding athlete. He attended Colgate University before launching his career as an insurance broker at age 20 upon his father’s retirement. Over three decades, John and his business partner built their firm, Kalvin-Miller International, into one of the largest brokerages in New York, before selling the firm in 1986. John and his son, Michael, later cofounded MJM Global Insurance, a firm that has thrived for more than two decades. While living in Manhattan, John met his wife of 52 years, Mary Leslie Erwin Malhame of Murray, Kentucky. They raised three sons in Englewood, NJ, where they loved to entertain their close friends, business associates, and large, loving extended family. John served as a trustee at the Dwight Englewood School, and rarely missed one of his sons’ sporting events. As well as supporting Michael’s entrepreneurial dreams, he helped encourage his sons, Darren and Kevin, to start their own business, a successful collection of restaurants in Columbus, Ohio. In addition to his family, John’s passions included golf, the New York Giants, smoking cigars, Italian food, and playing whist or gin rummy with his friends and with his card buddies at White Beeches and Boca West. John was universally adored by his friends and family as a strong yet gentle man with a good sense of humor. His confidence and optimism were unwavering, and he was always honest and kind. Family: John is survived by his wife, Leslie, three sons and beloved daughters-in-law, and nine grand children that were his pride and joy: Michael, his wife Debbie, and their children Vanessa, Gavin, Samantha, and Mason; Darren, his wife Jordan, and their children Lawrence, Margot, and Elliott; Kevin, his wife Katy, and their children James and Josephine; foster-daughter Nicola Natale; sister Renee Merhige; in-laws Frankie and Dan McNutt, as well as many adored nephews and nieces. He was preceded in death by his parents, Fred and Josephine Malhame, sister Helen Malhame, sister Jean Zaloom, and niece Helene Jabara. All friends and family are welcome to attend either or both the funeral service and graveside ceremony. Due to Covid, there will be no wake or meal of mercy. The family fully understands if you are unable to pay your respects in person and encourages all to consider viewing the services virtually. Funeral Service: December 11th, 10:00 AM, Our Lady of Mount Carmel, 10 County Road, Tenafly, NJ 07670 (Masks are required and capacity is limited to 150 guests, seated in socially distanced family groups.) Can be viewed on Mt. Carmel Church Facebook Page or the Zoom Invite below. Graveside Ceremony: December 11th, 11:15 AM, Brookside Cemetery, 425 Engle St, Englewood, NJ 07631. Can be viewed via the Zoom Invite Below. Live Online Broadcast: A live broadcast and recording of the Funeral Service will be available on the church’s facebook page @olmctenafly (www.facebook.com/olmctenafly) Zoom: Funeral Service and Graveside Ceremony: https://us02web.zoom.us/j/8508675755?pwd=QllrSDkwcEVtL0d5eWhwRnhnbXE2UT09. Meeting ID: 850 867 5755 Passcode: John Tributes: Please use the Tribute Wall on the website of Barrett Funeral Home (Tenafly, NJ) to view pictures of John, share your memories of John, and send condolences to his family. In Lieu of Flowers: Donations in memory of John may be made to St. Judes Children’s Hospital, Boca West Children’s Foundation, or Poly Prep Country Day School Financial Aid.

John Fred Malhame, age 81, of Englewood Cliffs, New Jersey, departed this earth on December 5th, of complications from a head injury he sustained one week earlier at the family&#8217;s farmhouse retreat in Hudson, NY. He was in the arms of his... View Obituary & Service Information

The family of John Fred Malhame created this Life Tributes page to make it easy to share your memories.