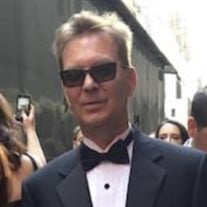 McCORMACK, John Michael of Elmhurst, NY (formerly of Tenafly) passed away on May 20, 2020. Dear son of the late James and Ann McCormack. Beloved brother of Katherine McCormack (Ted Kagy), Mary Mazza (Tony), James McCormack, Paul McCormack (Kathleen) and the late Roy McCormack. Adored uncle of Ryan Kagy (Laura), Alex Kagy, Ainsley McCormack and Trevor McCormack. John loved the theater, and was an Off Broadway Producer for multiple theaters during his career. Funeral services will be private. To visit John’s tribute page please visit www.barrettfuneralhome.net. INTAR (Lou Moreno, Artistic Director) is sad to announce that John McCormack, longtime Executive Director of INTAR, died on Monday May 18th in his Queens NY home from natural causes related to COVID-19. McCormack was 61. “The loss of John McCormack is not just a loss for INTAR, but for the Off-Broadway theatre community as well. He was a living history of Off Broadway. There was scarcely a name or a play he did not have intimate knowledge of and that perspective is what kept our offices full of chatter and laughter. INTAR lost the Executive Director with the longest term in our history. Our community lost a kind and generous soul. And Off-Broadway lost its biggest champion and fan,” said Mr. Moreno. John McCormack was born in New York City on April 13th 1959. He attended Hamilton College graduating in 1981. One of the unsung heroes of New York’s not-for-profit theater, McCormack worked tirelessly behind the scenes, nurturing many emerging artists – writers, directors, actors, and designers – over his almost 40-year career. He began his career at Ensemble Studio Theatre, where he was Producing Director and co-founded the Directors Project with the Drama League, followed by stints at Naked Angels (Artistic Director); the Zipper Theater (co-founded/Artistic Director); Summer Shorts (co-founded/Producing Artistic Director); his own company, All Seasons Theater; and INTAR (Executive Director since 2006). He served as guest lecturer and oversaw student productions at Sarah Lawrence College. Some of the many careers he championed include Kevin Bacon, Mark Brokaw, Patricia Clarkson, Marian Fontana, Richard Greenberg, Roger Hedden, Lucas Hnath, Wendy Kesselman, Leslie Lyles, Eduardo Machado, Deb Margolin, Rob Morrow, Keith Reddin, Will Scheffer, Paul Weitz, and Alan Zweibel. Some of those he nurtured would go on to be artistic directors of their own theatres such as Douglas Aibel, Bernard Telsey and Christopher Ashley. In 2014 he was proud to bring Albert Innaurato and Jack Hofsiss back to NY theater after a long absence (“Doubtless”). "Nobody encouraged me more as a playwright than John McCormack. He produced the very first staged reading of Side Man and at least a dozen of my one-acts over the past 25 years. He was tireless in his support of writers and actors, and utterly self-effacing when anyone tried to thank him." –Warren Leight, Tony Award winner & Pulitzer Prize finalist for Side Man and Executive Producer “Law & Order: SVU.” “John was a remarkable blend of intelligence, curiosity, thoughtfulness, good humor and modesty. He was interested in sports, 13th-century philosophers and everything in between. He had a self-effacing devotion, not only to friends but to others who needed his help. He loved to laugh and he loved a good play.” - D.S. Moynihan, Vice President of Creative Projects, The Shubert Organization. “John McCormack gave me space to bring in an early rough draft to an informal reading series he was having with my partner, John Augustine. It was the first act of what was to become Betty’s Summer Vacation. And later I saw the Summer Shorts series and they were exciting to see. And then he asked me to write one which I did. He was a great supporter of writers on every level.” – Tony Award winner & Pulitzer Prize finalist Christopher Durang. “I met John at Ensemble Studio Theatre within days of arriving in New York, and he immediately took me under his wing - as he did so many others - and guided and nurtured me over the years. He was a wonderful, kind, smart, generous and wickedly funny man - we spent so much of our time together just laughing.” - Award winning director Mark Brokaw (How I Learned to Drive, This is Our Youth). “One of JMAC’s talents was bringing together amazing people. From EST to the Zipper to 59E59. He would call me and say, ‘I want you write a one-act. 20 to 35 minutes. It should have at least 2 laughs in it.’ And then he would chuckle. John never saw a problem. He only saw possibility and solutions. He was a great mentor and friend to so many writers, actors, and directors. All were special and equal in his eyes. He made me feel more talented than I am. He made me feel loved and appreciated. He did that for everyone he met.” – playwright John Augustine. “He was always so supportive of everyone except himself,” said Karen Hauser, Director of Research at the Broadway League. He is survived by his sister Katherine McCormack and her spouse Theodore Kagy, his sister Mary Mazza and her husband Anthony Mazza, his brother James McCormack, and his brother Paul McCormack and his spouse Kathleen McCormack. He is also survived by his beloved niece and nephews: Ryan Kagy and his spouse Laura Goodman, Alex Kagy, Ainsley McCormack and Trevor McCormack. He is predeceased by his father James McCormack, mother Ann Root McCormack, and his brother Roy McCormack. Funeral services were private. A memorial service will be announced at a later date. In lieu of flowers, the family has requested donations in his memory be made to the Actors Fund COVID-19 Emergency Relief.

The family of John Michael McCormack created this Life Tributes page to make it easy to share your memories.

Send flowers to the McCormack family.