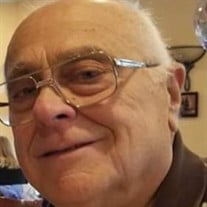 Bonino, Joseph Jr. (78) of Demarest, New Jersey was called home on February 3rd, 2020. Joseph was born on August 22, 1941. The son of late Erma (Bernardi) Bonino and Joseph Bonino Sr. Predeceased by Constantino (Frank) Bonino, his sister Gloria (Bonino) Botto and Piero Botto, his in-laws Michael and Josephine Ocello, and his son-in-law Kenneth Pianghi. On June 30th, 1963, He married his childhood sweetheart Carmella (Ocello) Bonino who survives him and shared 56 wonderful years together. Joseph worked with the United States post office in Englewood, New Jersey, was a truck driver and started a cleaning business with his wife in 1969 called Bonino Maintence. He also worked as a furniture installer for Nemshoff Chairs. Once he retired, he became a crossing guard in 2005 for the Borough of Demarest. In 1994, he became a driver for the Demarest Volunteer Ambulance Corps where he achieved active life membership and currently served as a board of trustee member for the last 6 years. He is also survived by his daughters, Joanne (Bonino) Pianghi, Donna (Bonino) Citakian and her husband Vrej Citakian, and his 5 grandchildren Cheryl, Jillian, and Michael Pianghi and Joseph and Adrianna Citakian. Survived by his sisters in law and brothers in law, many cousins, nieces, nephews and friends. Visitation will be at Barrett Funeral Home on Thursday, February 6th, 2020 from 2-4 and 7-9. Funeral mass will be held on Friday, February 7th, 2020 at 10am at St. Therese Church in Cresskill. In lieu of flowers, donations can be made to the Demarest Ambulance Corps P.O Box 131. Demarest NJ, 07627

The family of Joseph Bonino Jr. created this Life Tributes page to make it easy to share your memories.

Send flowers to the Bonino family.