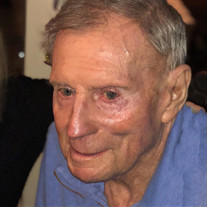 Hon. Joseph Franklin Ringelstein, 93 years old, of Demarest, died peacefully on Friday, December 28, 2018 surrounded by his loving family. He was predeceased by the love of his life, wife of 64 years, Eunice Patterson, a daughter Jo-Anne, his parents, the late Joseph and Mildred Bettner Ringelstein of Rochester, NY and three sisters, Marilyn Kendell, Elaine Urlaub and Joan Parkes. Joe is the loving father of Joseph, Jr. (Lynda), Peter (Theresa), Leslie, Todd (Sandra), Geoffrey (Jennifer), Kim Miller (William), Russ (Jennifer), Jay Mufson (Stephen). He is also survived by his brother Paul (Nancy), 17 grandchildren and 6 great-grandchildren. Joe graduated from Villanova in 1948 as a class officer and served as the President of NY Villanova alumni. Joe proudly served his country during WWII as a LTJG after graduating from USNR Midshipmen school, Norte Dame, 1944. Joe founded Automation Graphics in NYC in 1956. Joe, a 64 year resident of Demarest served both as Councilman for three years and Mayor from 1965-1966 and 1969-1974. Joe should be remembered as an honorable and loving family man who served his community and his country. He was active, coaching Little League, a member of the American Legion, a Scout Master, President of St. Joseph Holy Name Society, and a member of the Zoning Board. As a member of the Demarest Swim Club since its inception in October 1959, Joe loved to swim and actively engaged in sports as a participant in golf, tennis, softball and running. Joe was instrumental in preserving open space through NJ’s Green Acres Program in Demarest providing nature trails, skating rinks and recreational fields. A baseball field is now named in his honor at Wakelee Field. Joe loved tending his garden and the music of the Big Band era. Our family is appreciative of the support of his direct caregivers, the Rockleigh Jewish Home, Englewood Hospital and his Medical team. Memorial visitation will be Wednesday, January 2nd from 4-8 at The Barrett Funeral Home, Tenafly, NJ. A Memorial Mass will take place at St. Joseph's Church, Demarest on Thursday, January 3rd at 11AM. In lieu of flowers contributions can be made to Demarest Athletic Association, Demarest Volunteer Ambulance Corps, The Demarest Fire Department or The Jewish Home Foundation, Rockleigh http://www.jewishhomefamily.org/JHFoundation/ or any volunteer work to your own community. For further information visit www.barrettfuneralhome.net.

Hon. Joseph Franklin Ringelstein, 93 years old, of Demarest, died peacefully on Friday, December 28, 2018 surrounded by his loving family. He was predeceased by the love of his life, wife of 64 years, Eunice Patterson, a daughter Jo-Anne, his... View Obituary & Service Information

The family of Hon. Joseph Franklin Ringelstein created this Life Tributes page to make it easy to share your memories.