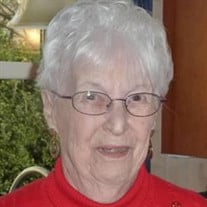 Margaret Kuffner Lifelong Resident of Bergen County Died peacefully on April 30th at the age of 98. Born in Englewood, she was the second of three daughters of Frank and Sophie Kuffner. She was devoted to her mother and lived with and cared for her until her death in 1982. Margaret is pre-deceased by her sisters, Emily and Dorothy. She is survived by her niece Elizabeth (Peter) Bonchonsky, nephew James (Leslie) Simondet and great-nephews, Peter and Daniel Bonchonsky and great niece, Julia Simondet. Margaret was raised in Englewood, schooled during the Depression, and following graduation from Dwight Morrow High School, she found work as a secretary. She eventually went to work as secretary and administrative assistant in the medical department of Exxon then Standard Oil. She commuted into Manhattan to her office high in Rockefeller Center for over 30 years. Margaret frequently dealt with overseas employees, mainly from South America, and studied and became conversant in Spanish to better communicate with them. She loved her job, her boss and her co-workers and memories of her years there never failed to make her smile. Margaret loved to travel and had many adventures throughout her life. Her favorite vacations usually involved a Caribbean cruise and beautiful beaches. In 1955 she took a month long trip on a freighter ship with a handful of passengers docking at numerous ports in Central and South America and the Caribbean. She loved working with children and spent several teenage summers as a nanny on Nantucket Island. During the early 1950’s Margaret volunteered at the New York Foundling Home where she lovingly cared for infants. Margaret had a wide circle of friends and many hobbies including knitting, needlework, painting, ceramics and gardening. She was an active member of West Side Presbyterian Church in Englewood throughout her life and later The Presbyterian Church in Leonia. After retiring in 1986, Margaret continued to travel and took many tours across the U.S. and Canada making new friends along the way. She was a dedicated volunteer for many years at the Golden Ladder Thrift Shop in Englewood and at Englewood Hospital. She loved new challenges and was always eager to learn a new skill or immerse herself in the history of a new location. She took up quilting and made dozens of beautiful quilts to be sold at the Golden Ladder or given as gifts to family and friends. Independent her entire life, Margaret spent her last years living at the Sunrise in Cresskill where she made more friends and participated in several activities. She was attending arts and crafts classes every week until a month before she died. She described her final years as “easy living” and loved the community there. Margaret, known as “Aunt Mai” to her family, had an unfailingly warm, kind and generous spirit. She was never known to speak a harsh word. She laughed easily and had an incredibly positive attitude towards life. Her reliable advice was always “Don’t worry, everything will work out.” She was a loving and steadfast presence in her niece and nephew’s lives and was part of every family holiday and celebration. Margaret was treasured by her family, extended family and friends and will be greatly missed. A memorial service will be planned at a later date. Donations in Margaret’s memory may be made to The Presbyterian Church in Leonia.

Margaret Kuffner Lifelong Resident of Bergen County Died peacefully on April 30th at the age of 98. Born in Englewood, she was the second of three daughters of Frank and Sophie Kuffner. She was devoted to her mother and lived with and cared... View Obituary & Service Information

The family of Margaret Kuffner created this Life Tributes page to make it easy to share your memories.

Send flowers to the Kuffner family.