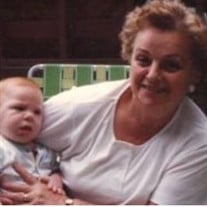 Margaret McLaughlin (née Becker) died peacefully in her sleep on March 13, 2018 in Bergen County, NJ. She was 92. Margaret was born on July 20, 1925 on a chicken farm in Latrobe, PA to her immigrant parents Albert and Sophie Becker; and was the eldest of 5 children. Her family moved to Brooklyn, NY in 1928 and she graduated from Bushwick High School in 1941, where her classmates voted her the senior with the “Best Sense of Humor.” She married Brooklyn-born William McLaughlin in 1946 and they raised 7 children together, primarily in Richmond Hill NY. William died in 1979 after 33 years of joyful marriage. While raising her family, Margaret was an enthusiastic volunteer who contributed much to her local parish and community via the Rosary Society, PTA, Cub Scouts and Girl Scouts. She formed a block association and served as vice president of her parish council. With much persistence she convinced the Sisters of Saint Joseph in Queens to introduce basic sex education to the curriculum of the local parochial school in the early 1970s (no small feat). Later in life, Margaret worked as a secretary for the Girl Scout Council of Greater New York and at Mercantile, a consortium of department stores located throughout the U.S., at their headquarters in New York City’s garment district – work she enjoyed immensely. Throughout her adult life, Margaret was an accomplished cook who often prepared meals of international origins – sometimes learning directly from housewives in her Queens neighborhood who hailed from many different countries – and sometimes using children as language interpreters. She enjoyed preparing elaborate meals for large gatherings of family and friends. Margaret retired in 1991 and resumed an active life of community service, holding membership and leadership roles in the Ridgewood and Dumont (NJ) Friends of the Library, the Ridgewood Seniors Club, and her local chapter of AARP. She traveled extensively in the U.S. and Europe and greatly enjoyed trips to the Opera and Broadway, where she was sometimes mistaken for Secretary of State Madeleine Albright. Margaret is pre-deceased by her spouse William, her sister Marie Ricci, and her brother Albert Becker. She is survived by her brother Paul Becker of Mineola NY and her sister Louise O’Brien of Dallas TX. Margaret is also survived by her children Elizabeth Fitzgerald (Kevin) of Las Vegas NV, William McLaughlin of Boston MA, Margaret McLaughlin (Stephen McNally) of Wyckoff NJ, Thomas McLaughlin (Diana) of Suffern NY, James McLaughlin (Cheryl Bertolini) of Franconia NH, Daniel McLaughlin (Sandra Kennedy) of The Woodlands TX, and Virginia Maher (Steven) of River Vale NJ; and many beloved grandchildren, great-grandchildren, nieces and nephews. For those who would like to make a memorial donation, Margaret’s family asks that contributions be made to the Girl Scouts: https://www.girlscouts.org/en/adults/donate.html?gclid=EAIaIQobChMIu8qisvbu2QIV07fACh1xtwQjEAAYASABEgKIefD_BwE

Margaret McLaughlin (née Becker) died peacefully in her sleep on March 13, 2018 in Bergen County, NJ. She was 92. Margaret was born on July 20, 1925 on a chicken farm in Latrobe, PA to her immigrant parents Albert and Sophie Becker; and was... View Obituary & Service Information

The family of Margaret McLaughlin created this Life Tributes page to make it easy to share your memories.

Send flowers to the McLaughlin family.