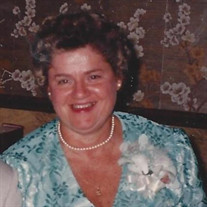 Mary Ann Gallivan (Smith) 90 years old formerly of Cresskill, NJ and Ormond Beach, FL passed away peacefully in her sleep on August 14th at the Atrium Post Acute Care Facility in Park Ridge, NJ. Mary Ann was born in Englewood, NJ on May 16, 1931 to Joseph Francis Smith Sr and Anna Helen Nunnenkamp Smith. Her father was a local home builder and she was proud to grow up in the family home he built at 32 Smith Terrace in Cresskill, a street that was named after him. She graduated from Tenafly High School in 1949. She was elated that she was able to attend her 65th class reunion in 2014. After graduating high school, she first worked at Elizabeth Arden and then at the United States Rubber Company as a secretary, while attending business school in the evenings at Radio City in Manhattan. She met Frank Woolsey Gallivan at a mutual friend’s wedding and they married in 1958 at the old St Therese Church in Cresskill. They had 3 daughters and settled into a home built by her father at 217 East Madison Ave in Cresskill. Mary Ann became a homemaker while raising her children. As her children all entered school, she held various jobs including working at Hamrahs clothing store, Willow Run Nursery & Garden Center, and finally finishing out her career as a receptionist at Thomas J. Lipton. During their time in NJ, Frank and Mary Ann were season ticket holders to the New York Giants and they enjoyed tailgating and attending football games with friends. They also made a trip out to the Rose Bowl in Pasadena for the 1987 Super Bowl. Upon retirement, Frank and Mary Ann moved to Florida, first settling in Palm Coast and then moving to Ormond Beach. While in Florida, Mary Ann learned to play golf and was an active member of the Palm Coast Woman’s Club, even serving as president for 2 terms. After the loss of her husband and as her health began to deteriorate, she moved back to New Jersey for care in 2012. She is survived by her two daughters, Helene Bainer (Kevin) of Bellvue and Silverthorne, CO, and Maureen Gallivan of Cresskill. She is also survived by a sister-in-law Joan Smith of Sayre, PA, 2 grandchildren, her remaining “Smith” cousins, and many nieces and nephews. She is predeceased by her husband Frank, daughter Elizabeth, sister Helen Meyer Racich and brother Joseph Francis Smith Jr. She will be dearly missed. She was a builder’s daughter and could tackle any home project from finishing a basement to fixing a plumbing problem. She will be remembered for being kind to the core, her joyous laugh that could fill up a room and her amazing ability to live above all the physical challenges of her failing health. In lieu of flowers, memorial contributions can be made in her memory to “The Elizabeth Gallivan Memorial Scholarship” and sent to the Cresskill Board of Education, 129 Madison Ave, Cresskill, NJ 07626 A memorial service and mass will be planned at a later date.

The family of Mary Ann Gallivan created this Life Tributes page to make it easy to share your memories.

Send flowers to the Gallivan family.