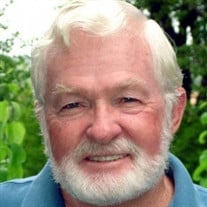 BOUDROT, Melvin Jude of Englewood passed away on October 29, 2020. Survived by his loving wife Jane Boudrot, his dear sons Mark (wife Susan) and Jon (wife Florette), cherished granddaughters Samantha, Alix, and Clara and great grandchildren Everett and Josie, a very close and loving family who will miss him so much. Born on December 13, 1932 in Boston, MA he went on to attend High School at St. Joseph’s College in Quebec, Canada, Newton High School in Newton, MA. He then went on to Enlist in the US Army (1950), where Mel received his high school diploma, completed Basic Training at Fort Dix Cryptology School and was a member of the Army Security Agency before he was Honorably Discharged (1953). In 1955 he married his love Roberta Jane Turini at St. Theresa’s in Harvard, MA. Mel was a professional Portrait Photographer early in his career and then Actor, mainly voice overs although he did on camera work - most notable role Father Tierney in "All My Children" in late 1970s and early 80s. He was also President of the New York chapter of the Screen Actors Guild (SAG) from 1995-1999 and remained a member of the board ever since. In the Mid 1970’s he was a Scoutmaster of Boy Scout Troop #26 in Englewood. Mel was an avid skier and sailer - From his first small sailboat, Danke Schoen to a beautiful 47' Swan named Cygnus, Mel was a true Captain. Sailing and racing the east Coast with the Corinthians along Long Island Sound, Maine, Bermuda. Once Mel and Jane retired they sailed the boat down to the Caribbean and spent many amazing years island hopping, being joined by family and friends. He enjoyed the hobby of meticulous woodworking and was great at sewing. Visitation will be Sunday, November 1, 2020 from 2-6 PM at Barrett Funeral Home 148 Dean Dr., Tenafly. Services and Interment to take place in Harvard, MA. In lieu of flowers donations may be made to: As an expression of sympathy, memorial contributions may be sent to Lahey Hospital & Medical Center - Neurology, c/o Philanthropy, 41 Mall Rd, Burlington, MA 01805. You may also donate online at support.laheyhealth.org/LHMCgive

The family of Melvin Jude Boudrot created this Life Tributes page to make it easy to share your memories.

BOUDROT, Melvin Jude of Englewood passed away on October 29,...