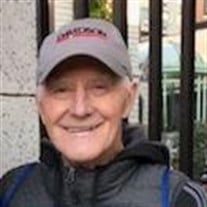 Michael (Mike) Gordon age 76, a long-time resident of Haworth, NJ passed away after a long battle with illness on Thursday, February 6, 2020. Mike was born on April 11, 1943 in Manhattan, NY to the late Harry and Ethel Gordon. Mike moved with his family to Fort Lee, NJ as a high school freshman and remained a Bergen County resident the rest of his life. Beloved husband to his wife of 38 years, Joan Gordon, and devoted father to his daughter Chelsea Gordon. Loving brother and eldest sibling to Dennis Gordon, Louise Ruhle, and predeceased by his brother H. Stephen Gordon. Mike was one of the good guys, admired for his engaging personality, big smile and contagious laugh, especially when he laughed at his own jokes. He instilled his love of sports in his daughter, coaching her in soccer at an early age, and following his daughter’s swimming and track meets. He enjoyed it so much he later became a soccer referee and track official. There were many ski trips enjoyed with close friends and yearly trips to LBI with his nieces, nephews and family. Mike was a diehard Mets fan and he and his daughter enjoyed many Mets games together, hoping each year for a better season. In his early years in Haworth, you would most likely find Mike on the tennis courts. In retirement, he enjoyed taking classes at Bergen Community College Institute for Learning in Retirement, visits to the NY Historical Society, Public Theater and Paper Mill Playhouse. He was a member of the Faringdon Condominium Association Board of Directors, holding numerous positions including President. Visitation for family and friends at Barrett Funeral Home, Tenafly, NJ on Thursday February 13th from 6-8 pm and Friday February 14th from 2-4 and 6-8 pm. The funeral mass will be held on Saturday February 15th at 9:30AM at Sacred Heart Church in Haworth with interment following at Hackensack Cemetery, Hackensack. In lieu of flowers, donations in his memory can be made to: Doctors Without Borders - https://donate.doctorswithoutborders.org/onetime.cfm Sierra Club - https://www.sierraclub.org/ Haworth Volunteer Ambulance Corps, Inc - PO Box 263, Haworth, NJ 07641

Michael (Mike) Gordon age 76, a long-time resident of Haworth, NJ passed away after a long battle with illness on Thursday, February 6, 2020. Mike was born on April 11, 1943 in Manhattan, NY to the late Harry and Ethel Gordon. Mike moved with... View Obituary & Service Information

The family of Mike Gordon created this Life Tributes page to make it easy to share your memories.

Send flowers to the Gordon family.