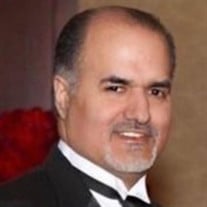 Paul Michel Fernandez 58 years young, of Rutherford New Jersey, passed away on March 29, 2020. Born on December 30, 1961 in New York City, New York, to Mario and Marie Fernandez. Paul was a loving husband, step father, brother and uncle to many. Paul had a great passion for music. Growing up the youngest of four brothers, his influence ranged from Motown, Hendrix to Mussorgsky. He was an excellent guitar player, vocalist and songwriter. Formed a band in the 80’s, played the club circuit in NYC and New Jersey. Paul loved giving back to his community. As a lead guitarist it was an honor to play benefit concerts raising funds to help families with medical costs and awareness for animal rights. As a martial arts instructor, Paul organized and taught free Women's and children’s Self-Defense and Parent Awareness classes. Paul loved sports and had a love-hate relationship with the Knicks and Mets. One of Pauls favorite childhood memories, at the age of 12 he interviewed Walt “Clyde” Frazier, in the dressing room at Madison Square Garden for a school project. As a Principal Solutions Engineer with BMC software, Paul enabled partnership success with leading technology companies in North America, Asia and Europe. The best of both worlds collided during a company awarded event, playing under the stars on a stage in the ocean in Hawaii with several known musicians. He was an accomplished businessman, recipient of the Vice President Award from BMC, a consummate professional who was recognized and respected by his peers globally. Paul was excited with his new position at Salesforce. He was blessed to be surrounded with dedicated co-workers, business associates and good friends. Paul was very proud of his Cuban heritage and famous for his black beans. He loved being at home enjoying a good meal, surrounded by his Siberian huskies. Paul is survived by his wife Sherrie Fernandez of 30 years, step son Gary Reininga and wife Jennifer of Tx; mother Marie Fernandez, brother Alan Fernandez and wife Laura of NY; many nieces and nephews he loved dearly. Paul is now united in the presence of our Savior and preceded in death by his father Mario, brothers; Glenn and George, and his loving nephew Steven Fernandez. A celebration service of Paul’s life will be held at a later date when we can all be together. In lieu of flowers please make a donation to your favorite charity in memory of Paul.

The family of Paul Fernandez created this Life Tributes page to make it easy to share your memories.

Send flowers to the Fernandez family.