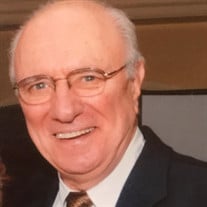 BOSCO Philip M. of Haworth passed away peacefully at home on December 3, 2018 surrounded by his wife of 62 years and seven children. Philip was born and raised in Jersey City, first attending St. John’s elementary school and later St. Peter’s Prep where he came under the tutelage of retired actor James Marr and developed his life long love of the theatre. With the encouragement of Mr. Marr, he attended The Catholic University of America and joined its renowned drama department. It was there that he met his beloved wife, Nancy and many life long treasured friends. A Tony award winning actor, he was celebrated for playing many great roles during his illustrious career in the New York theatre, but his greatest role was that of cherished husband, father, grandfather, brother, uncle and friend. Philip is survived by his wife, Nancy A. (nee Dunkle), children Diane Bosco and her husband James, Philip and his wife Mayda, Christopher and his wife Marlene, Jennifer Bosco, Lisa Bosco-Tafro and her husband Al, Celia Bosco and John and his wife Valerie. Grandchildren Philip, Joseph, Sara, Jenna, Max, Emily, Samson, Emma, Frankie, Alex, Luke, Analisa, Cameron, Joseph and Ben. Brother of Donald and his wife Lee and David and his wife Kathie. Visitation at the Barrett Funeral Home 148 Dean Dr Tenafly on Thursday 2-4 & 6:30-9:30 PM. Funeral Mass Friday 11 AM Mt Carmel Church Tenafly. Interment Brookside Cemetery Englewood. In lieu of flowers donations may be made to The Alzheimer’s Foundation (alzfdn.org).

The family of Philip M Bosco created this Life Tributes page to make it easy to share your memories.

BOSCO Philip M. of Haworth passed away peacefully at home on...

Send flowers to the Bosco family.