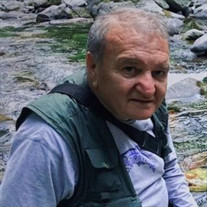 Pierluigi Abiad, a longtime resident of Tenafly and Teaneck, NJ, passed away on September 5, 2020 from complications related to Parkinson’s disease. He was 82. Pierluigi is survived by his wife of 54 years, Sue Abiad (nee Bucklin), his children, Victoria Morandi and Katherine De Luca (and her husband, Fabrizio); his three grandchildren, Sebastian, Jake and Natalie, and his sister, Clara Nur Jercinovich (of Chicago, IL). Pierluigi was born in Turin, Italy on February 13, 1938 to AnnaMaria Odone and Anis Abiad. During WWII, he and his sister were sent to live in a protected hamlet tucked away in the Italian Alps. He lived here until he was 9 and moved back to Turin to continue his education in boarding schools. He graduated with a PhD from the University of Turin with a degree in Geology and traveled to Africa to work there as a Geologist. In the early and mid 1970’s respectively, he welcomed his two beautiful daughters, who were, along with his wife, Sue, the most important part of his life. In the 1990’s he received his CLU and MSFS from the American College of Financial Services. He had been an agent with NY LIFE Insurance Co. for nearly forty years. Pierluigi was a devoted husband, father, and grandfather as well as an avid outdoorsman. He enjoyed hiking, skiing, fishing, and backpacking in the Alps, Patagonia, the Himalayas, and the Rockies just to name a few ranges. He traveled to more countries than one could count, was a voracious reader, scholar and was a master porcini hunter and polenta maker. He was a quiet man known for his sense of humor. He adored being in the company of his friends all over the world and truly enjoyed his life, good food, and fine wine no matter where. In these last years, he loved his time hiking the Alpine Lookout down to the Hudson River and would spend months on end at their family home in the Italian Alps. He will be deeply missed by his friends, family, and all who knew him. Pierluigi wanted his ashes to remain eternally in the Italian Alps. When it becomes possible to travel again, his family will take him there. Donations may be offered at www.parkinson.org.

Pierluigi Abiad, a longtime resident of Tenafly and Teaneck, NJ, passed away on September 5, 2020 from complications related to Parkinson&#8217;s disease. He was 82. Pierluigi is survived by his wife of 54 years, Sue Abiad (nee Bucklin), his... View Obituary & Service Information

The family of Pierluigi Abiad created this Life Tributes page to make it easy to share your memories.

Pierluigi Abiad, a longtime resident of Tenafly and Teaneck,...