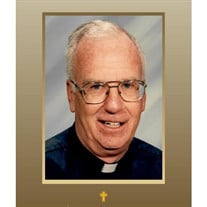 (Darien, IL) The Province of the Most Pure Heart of Mary (PCM), Order of Carmelites, mourns the death of the Reverend Joseph McGowan, O.Carm., who died at the age of 84 on Tuesday, September 15, 2020 at Holy Name Hospital in Teaneck, New Jersey. Joseph was born to (the late) Matthew McGowan and (the late) Mary (Kelly) McGowan on April 11, 1936, in Jersey City, New Jersey. His given name at baptism was Joseph Francis. He is predeceased by his brothers Michael and Francis. Joseph entered the Carmelite Junior Seminary in 1950 and then continued on to study philosophy at Mount Carmel College. He entered the Carmelite novitiate in New Baltimore, Pennsylvania, on August 21, 1955, and professed simple vows August 22, 1956, taking the religious name of Canice. He continued his studies at St. Bonaventure University and was awarded a Bachelor of Arts for Philosophy in 1959. Joseph professed solemn vows with the Carmelites on August 22, 1959, in Washington, DC, and was ordained a Carmelite priest on June 2, 1962. From 1959 to 1963, Joseph studied theology at Whitefriars Hall in Washington, D.C., and then went on to be awarded a Masters in education and counseling from Fordham University in the Bronx, New York. He then went on to earn a bachelor’s degree in Philosophy from St. Bonaventure University in Olean, NY, study Theology at Whitefriars Hall in Washington, DC., and earn his master’s degree in Library Science from Catholic University of America. Father Joseph’s first assignment was in 1963 as faculty at DeSales High School in Louisville, Kentucky while completing his fifth year of Pastoral Theology studies. In 1964 he moved to Hamilton, Massachusetts, where he taught at the Carmelite Junior Seminary. From July of 1969 to July of 1970, Father Joseph served as a military chaplain for the United States Navy. In 1971, he returned moved to Mundelein, Illinois, to serve as a counselor at the former Carmelite High School for Boys, the current Carmelite Catholic High School. The year 1975 marked a transition for Father Joseph from education to ministry. He began at the St. Thérèse Chapel shopping center ministry in Peabody, Massachusetts, in 1975, and moved to St. Mary Parish in Closter, New Jersey, in 1976 to serve as their associate pastor and as local vocation director for the Province. After eight years of service in Closter, Father Joseph moved to Teaneck, New Jersey, where he served as associate pastor for St. Anastasia Parish followed by a six-month position as associate pastor at Parroquia de Santa Ana in Yauri-Espinar, Espinar, Cuzco. Following a six-month sabbatical, Father Joseph was named Pastor at Sacred Heart Parish in Tucson, Arizona, where he served from 1996 to 2006, before moving to Cresskill, New Jersey, for retirement. Though 2006 is listed as Father Joseph’s official year of retirement, he continued to offer Sacramental Assistance at St. Thérèse Parish in Cresskill, New Jersey, through June of 2011. In July of 2016, Father Joseph moved to Sunrise of Cresskill, where he remained until his death. In addition to the Carmelite community Fr. Joseph is survived by his niece Lynda McGowan and her husband Jeff Pollack, his nephews, Matthew McGowan and his wife Colleen, Michale Marino and his wife Andrea and eight grand-nieces and nephews, and the cousins in Skerries and Balbriggan, Ireland. May he rest in peace. Visitation Friday, September 18th from 9:30AM-11AM with funeral mass to begin at 11AM at St. Therese of Liseux Church, Cresskill. Interment to follow at Mt. Carmel Cemetery, Tenafly. Donations in honor of the Father Joseph McGowan, O.Carm., may be made to: the Society of Mount Carmel, 1317 North Frontage Road, Darien, Illinois, 60561.

(Darien, IL) The Province of the Most Pure Heart of Mary (PCM), Order of Carmelites, mourns the death of the Reverend Joseph McGowan, O.Carm., who died at the age of 84 on Tuesday, September 15, 2020 at Holy Name Hospital in Teaneck, New Jersey.... View Obituary & Service Information

The family of Rev. Joseph McGowan O.Carm created this Life Tributes page to make it easy to share your memories.