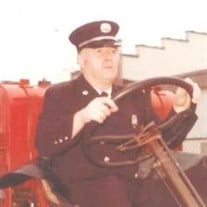 Robert S. Fuller, 94, of Tenafly, NJ, passed away on December 1, 2019 in his home at Cardinal Village in Sewell, NJ. He was born on May 30, 1925 in Englewood, NJ, to Floyd Merrick Fuller and Anna Louise Fuller (nee Sanford) of Tenafly, NJ. He lived in Tenafly for 92 years. He was predeceased by his loving wife Ruth Elizabeth Fuller (nee Steger) and his long term companion, Lydia Reitz. Father of Susan Fuller Mann (J. Michael) of Stratford, NJ, Nancy Ruth Fuller Wainwright (Alfred, Jr.) of Sewell, NJ, and Robert John Fuller (Rachel) of Cedarburg, WI. Grandfather of 7 and great-grandfather of 8. Brother of Jean Fuller Sears (Richard) of Lenexa, KS. Predeceased by sisters Marjorie Gasch of MN and Carol “Colly” Chaffee of MT. Bob was known to all as a volunteer fireman and an officer at Tenafly Fire Department, and later in life, as a Fire and Safety Inspector for the Borough of Tenafly. He was enlisted in the 101st Airborne Division of the US Army in Europe during WWII, and later became a photo engraver for Alco Gravure in Hoboken, NJ, for over 30 years. A lifelong member of the Presbyterian Church at Tenafly, he served several terms as a Deacon. His passion for American history led him to trace his roots to passengers on the Mayflower, and to join the Society of the Cincinnati, for ancestors of those who fought in the Revolutionary War. A lover of the outdoors, he enjoyed hiking and birdwatching, which are also embraced by his extended family. He often broke out in songs, including hymns and popular tunes from the 1940’s. His upbeat manner and zest for life will be remembered and greatly missed. A funeral service will be held this Saturday, Dec. 7, at 10:30 a.m., at the Chapel of the Presbyterian Church at Tenafly, 55 Magnolia Ave., Tenafly, NJ, with visitation at the Chapel starting at 9:30 a.m. Burial at Brookside Cemetery following the service. In lieu of flowers, memorial contributions can be made to restore the 1911 American LaFrance firetruck he recently donated to the Englewood Fire Dept. at Englewood Professional Firefighters Local 3260, PO Box 8125, Englewood, NJ 07631, Attn. 1911 American LaFrance Preservation Fund, or to the Greenbrook Nature Sanctuary, Tenafly, NJ 07670.

Robert S. Fuller, 94, of Tenafly, NJ, passed away on December 1, 2019 in his home at Cardinal Village in Sewell, NJ. He was born on May 30, 1925 in Englewood, NJ, to Floyd Merrick Fuller and Anna Louise Fuller (nee Sanford) of Tenafly, NJ.... View Obituary & Service Information

The family of Robert S Fuller created this Life Tributes page to make it easy to share your memories.

Send flowers to the Fuller family.