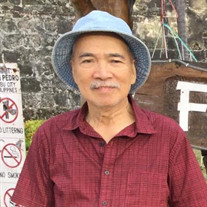 Rolando de Leon, 79, of Woodside, NY, passed away peacefully on February 23, 2020 in Saddle River, NJ. Rolando was born March 15,1940. He’s a beloved husband, father and grandfather to those he left behind. He spent his early life as an architect, but he enjoyed retirement the most, where he spent his days watching his grandchildren grow. He helped raise most of his grandchildren, and they fondly referred to him as Papa. His favorite past time late in life was watching them play basketball. He was quite the cook and also quite the critic of other people’s cooking. He enjoyed eating as much as he did cooking He had a love for salt that was uncanny. He always said that he could give up sweets, but that salt was near impossible. Up to his last day, he was thinking of eating soy chicken. He had a love for Shirley Bassey, Jeep Wranglers, Mini Coopers, dogs, parrots and exotic fish. He believed in perfection in everything and doing it right or not doing it at all. He was an avid chess player whos skills were unmatched by few. He was an intelligent man, with too many ideas and too little time. Unfortunately, he was diagnosed with cancer a year before his death. He fought valiantly and with integrity but he would eventually succumb to the condition. He is survived by his wife, Delia de Leon, and his children Richard Kraus and Yasmin de Leon-Kraus, Dax and Ruby de Leon, and his grandchildren Katalina de Leon, Jack de Leon, Collin Kraus, Lara Kraus, Cailleigh Kraus and Jacob de Leon.

Rolando de Leon, 79, of Woodside, NY, passed away peacefully on February 23, 2020 in Saddle River, NJ. Rolando was born March 15,1940. He&#8217;s a beloved husband, father and grandfather to those he left behind. He spent his early life as... View Obituary & Service Information

The family of Rolando de Leon created this Life Tributes page to make it easy to share your memories.