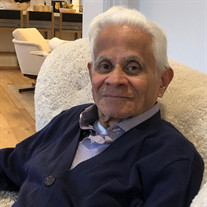 Saligram Narayan Rao Jagannath, 83, of Tampa, Florida, passed away on Thursday, February 20, 2020. Sal (his proud American Name) was born on July 13th 1936 in Bangalore, India - the oldest of five children. After graduating from University College of Engineering in Bangalore (Now, University Visvesvaraya College of Engineering Bangalore), with a BS in Civil Engineering, in 1956, he married Leelavathi Ramaswamia in 1962. Sal immigrated to Flushing, Queens, New York City in 1970 with all the hope and determination of fulfilling The American Dream for his family. After establishing himself he soon brought his wife and two sons, Kumar and Diwakar, in October, 1971. After the tragic loss of their first son, Kumar, in July 1974, Sal and the family moved from New York City to Hartford, Connecticut, where their third son, Ram, was born, and they lived until 1985. At that time, the family moved to Lincoln, Rhode Island. Sal and Leela moved to Tampa in 2005, after their retirement, to a gracious, welcoming Indian community that they wholly embraced and cherished. Sal always had great dreams and was determined to make his way to America to realize them. Sal’s greatest attribute was a relentless work ethic and devotion to his family. From the age of 16 until his late 70s, Sal never stopped working. He was the consummate caregiver, from supporting his mother and helping to raise his siblings, to courageously leaving the comfort of home and striking out in a new world so that he could give his family the greatest opportunities. Throughout his career, Sal was acutely aware of the power of education in making strides in achieving the American Dream. While working during the day, supporting his family, Sal went to school at night and achieved his MBA at the University of Hartford (CT). Sal’s career was devoted to two main ideals: hard work yields positive outcomes and work is conduit for prosperity and familial success. There may not be any large buildings or monuments to his career, but Sal’s work is felt throughout the East coast. From nursing homes to banks to commercial offices and even buildings for the US Military, with care and devotion Sal worked to build them all. In addition to his family, Sal was passionate about sports and the arts. He and Ram shared a love of all things New England Patriots, culminating in watching them win the Super Bowl in Arizona in 2015. When Diwakar first started playing golf in the early 80s, Sal too started to learn and eventually joined a club. For his 65th birthday, he played many rounds with his sons in Hawaii that truly was a blessing for all. More than anything, though, was his devotion to his wife Leela. They were married for 57 years and in that time were hardly ever apart. When she passed away in October 2019, he lost his compass, but he persevered and found a new happiness with his Sons, Daughters in Law, and grandchildren. Although he was supposed to be relaxing and savoring being taken care of, Sal never stopped being the caregiver. He would consistently advocate for his fellow residents at BrightView. Sal is survived by his sons, Diwakar and Ram, brother, Ragunath, sister, Mani, daughters-in-law Karen Colangelo and Courtney (Walsh) Jagannath, and granddaughters Luna and Mila Jagannath. A religious ceremony and cremation will be held at Garden State Crematory in North Bergen, NJ from 10:30 am to 11:30 am on Sunday February 23, 2020. A celebration of his life will be subsequently held.

The family of Saligram Narayan Rao Jagannath created this Life Tributes page to make it easy to share your memories.

Send flowers to the Jagannath family.