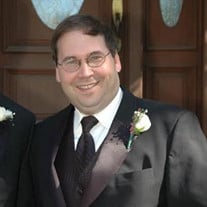 KLINE, Stephen William, USNA Class of 1990, who lived in Clifton, NJ, died on July 5, 2018 of a heart attack. He was 50 years old. Steve was the eldest son of Richard William and Janette Hill Kline of Williamsburg, VA. He was predeceased by a sister Katharine Love Kline age 7 in 1972. He is survived by his parents, his brother Charles Richard Kline, of Harleysville, PA, Charles’ wife Laura, their two children Alexander William and Elizabeth Love; and brother David Alistair Kline of Greenville, SC. Steve came to the Naval Academy from Williamsport High School, Williamsport, Pennsylvania where he was the valedictorian. While at the Naval Academy he received commendation in the French department and discovered a love of classical civilization. He served as Damage Control Officer on both mine sweeper patrolling our Gulf Coast and then a ship in the Persian Gulf. He told us of an occasion when he helped the Captain by conversing in French with a visiting dignitary, and translating into English. No one was available who spoke the dignitary’s native language, so Steven found the “lingua franca”. After four years in the Navy, he entered Rutgers University where he received a master’s degree in classical studies. He became a Latin teacher, first at a private school, then at Lakewood High School in Lakewood, NJ and lastly Cresskill High School, Cresskill NJ where he was employed at the time of his death. When the Latin program was dropped at Cresskill, he taught social studies/history. The combination of Navy discipline, love of his subject and kindheartedness endeared him to his students, their parents and the faculty. He baked countless hundreds of cupcakes and cookies for school fund-raising bake sales. Although he never married, and had no children of his own, his parents believe that his students became his sons and daughters. Visitation will be held at Barrett Funeral Home, 148 Dean Dr., Tenafly on Wednesday, July 11, 2018 from 4-8 PM. Interment and committal service will be in Shenango Valley Cemetery in Greenville, PA on Friday, July 13, 2018. In lieu of flowers, donations to the Cresskill High School Library or the Band would be appreciated.

KLINE, Stephen William, USNA Class of 1990, who lived in Clifton, NJ, died on July 5, 2018 of a heart attack. He was 50 years old. Steve was the eldest son of Richard William and Janette Hill Kline of Williamsburg, VA. He was predeceased by... View Obituary & Service Information

The family of Stephen William Kline created this Life Tributes page to make it easy to share your memories.