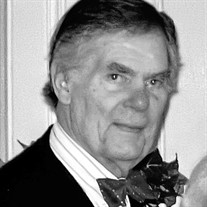 Stuart Soyster was born in Staten Island, New York in May 1924, the first of two children born to Mary Haslun Soyster and Thomas Henry Soyster. Stuart grew up in the northern section of the Bronx and was a member of the first class to graduate from the new Bronx High School of Science. In the fall of 1942, Stuart entered Rensselaer Polytechnic Institute in Troy, New York and received a degree in Chemical Engineering under an accelerated program while serving in the Navy. Subsequently commissioned an Ensign at Columbia University Midshipman School, Stuart was assigned sea duty at the end of World War Il and served on a light cruiser in the Atlantic and an LST in the Pacific/China Sea, where he earned the rank of Lieutenant JG. After the war, Stuart received a graduate degree from NYU in Industrial Engineering. His professional career started with a national industrial chemical company, moved into pharmaceutical plant operations, and ended in the cosmetic/fragrance business responsible for plant and general management, including in France. This French connection required frequent trips to France, often enjoyed with his wife Barbara. Stuart's sister, the "original" Barbara Soyster, now deceased, introduced him to one of her high school chums, Barbara Weikert, and in November 1949 they were married. For most of their more than 71 years together, they lived in Tenafly, NJ. Thomas William came along in 1952 and Susan Elizabeth in 1954. The Soysters joined First Presbyterian Church Englewood in 1951, where both children were later baptized and confirmed; and where Tom and his wife Filomena were married. During the years when Stuart's job needed most of his attention, he always found time to be an active church member. He served twice as an Elder on Session, was a Church School teacher, and was on many committees, most notably the Stewardship Committee. Vacationing in Maine during summers with the children and two golden retrievers were happy memories. His recreational activities included golf, solving crossword puzzles, woodworking, and creating miniature hand-painted houses for family and friends. After retiring in 1991, Stuart and Barbara enjoyed traveling throughout the United States and Western Europe. Visits with their children and grandchildren, Thomas, Jeffery and Mary in Farmington, CT and Christopher in Closter, NJ were always a pleasure. He spent 18 years mentoring small business start-ups as a volunteer counselor with SCORE and participating in daytime activities at FPC. These were memorable times devoted to sharing his energy, interests and active contributions to the community. Stuart’s loving family hopes you will keep his spirit in your hearts and walk your life journey knowing God's love goes with you.

Stuart Soyster was born in Staten Island, New York in May 1924, the first of two children born to Mary Haslun Soyster and Thomas Henry Soyster. Stuart grew up in the northern section of the Bronx and was a member of the first class to graduate... View Obituary & Service Information

The family of Stuart Soyster created this Life Tributes page to make it easy to share your memories.