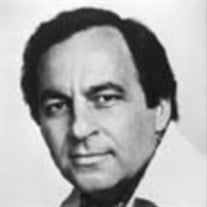 Theodore Lambrinos, a Greek-American baritone who sang over 50 major roles with the Metropolitan Opera, Carnegie Hall, Lincoln Center and with opera companies throughout the United States and internationally, passed away on March 29, 2021 in his hometown of Brooklyn, NY at the age of 85, from complications related to COVID-19. A loving father and family man, he is survived by his wife Hallie Neill Lambrinos, daughter Kari Lambrinos, son Ted Lambrinos and his wife Marissa, grandsons Alexander and Nicholas Lambrinos, and sister Clara Paul and her husband Nick Paul. He is predeceased by his first wife of 31 years, Parthena Lambrinos. Theodore had a powerful voice and compelling stage presence, and was known as one of the finest Verdi baritones in the world. Early in his career, Theodore won the Metropolitan Opera National Council Audition in 1965, awarded to promising young opera singers. He toured as a soloist with the famed Russian Don Cossack Chorus throughout the US and Canada and appeared in musicals On and Off-Broadway and in Summer Stock. He made his debut at the Met in 1968 as the Herald in Wagner’s Lohengrin. During his career, Theodore performed in hundreds of productions such as Rigoletto, Nabucco, Il Trovatore, Cavalleria Rusticana & Pagliacci, Aida and Tosca throughout Europe and the US, including with Domingo, Fleming, Zajick, and Corelli. He also sang for many dignitaries during his tours, including Indira Gandhi in India and Queen Sirikit in Thailand. He starred in Verdi’s Rigoletto for the first-ever performance of opera in Hanoi, Vietnam, and created the role of Carlo Tresca in the world premiere of Anton Coppola's Sacco and Vanzetti. His parents immigrated from Greece and settled in Brooklyn, NY. Growing up in Brooklyn, Theodore was voted President of his class at Erasmus High School, and frequently spoke of his love for Coney Island and attending Dodgers games at Ebbets Field. Theodore also had a passion for classical Greek music. He produced and sang in the Musical Salute to the Hellenic Spirit concert at Avery Fisher Hall, which provided young Greek singers the opportunity to perform. He frequently sang in Greek Orthodox churches, and released the album Theodore Lambrinos Sings Hellenic Songs. He also sang as a soloist on the album YA’SSOO! Sing-Along in Greek with Demetrios Pappas and The Amphion Choir. Later in his career, Theodore returned to his Broadway roots, and released an album of musical songs I Feel a Song Comin’ On. In recent years, he maintained an active voice studio in New York City, teaching his singing technique which sustained his 60-year career right though to his last performance at age 83. A memorial mass will be offered on Friday, April 16 at 11:30 am, at the Greek Orthodox Metropolitan Cathedral St. John The Theologian, 353 East Clinton Avenue, Tenafly, New Jersey. The service will also be available via live steaming on the church’s website at: http://stjohntenafly.org/ Interment at George Washington Memorial Park, Paramus, NJ. In lieu of flowers, donations are asked to be made to the ALS Association, a non-profit that funds global ALS research, and provides care services and programs that serve people living with amyotrophic lateral sclerosis (ALS), also known as Lou Gehrig's disease. Donations can be made at: https://www.als.org/donate

Theodore Lambrinos, a Greek-American baritone who sang over 50 major roles with the Metropolitan Opera, Carnegie Hall, Lincoln Center and with opera companies throughout the United States and internationally, passed away on March 29, 2021 in... View Obituary & Service Information

The family of Theodore Lambrinos created this Life Tributes page to make it easy to share your memories.

Theodore Lambrinos, a Greek-American baritone who sang over 50...

Send flowers to the Lambrinos family.