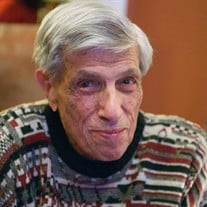 Walter Berman passed away on October 3, 2019 at 98 ½ years young surrounded by three generations of the family he created. He was known as Dad, Grandpa, Papa (Great-Grandpa), Uncle, Brother, Brother-in-Law and Family Patriarch. He is survived by his daughter, Jessica Berman-Bogdan, two grandchildren, Kimberly Bargiel and Michael Bogdan, son-in-law, Bart Bargiel, daughter-in-law, Clarice Bogdan, two great grandchildren, Sean and Leah Bargiel, and brother-in-law, Roy Cherwin, as well as many more nieces, nephews and extended family members. Walter cherished his family and taught as he lived – with kindness, honesty, humor, wit, and belief in doing what was right and fair. He and his beautiful wife, Frances (nee Cherwin) who pre-deceased him, met on the dance floor, fell in love, and continued dancing their way through life, providing us all with a model of the ultimate love story. Walter was a true renaissance man, an engineer and inventor by trade who could redesign and fix just about anything he touched. He was also an artist who created fascinating wire creations and drawings and even taught himself to play the ukulele. At 88 years old, he went on to write his autobiography as a legacy to his heirs. This handsome man (with a full head of hair!) will be missed by many but he gave us so much to remember him by. Walter’s family would like to think that he and his beloved wife Fran are together forever, dancing the night away as they did in their beautiful life on this earth. A Memorial Service will be held at 11:00 A.M. – 1:00 P.M., October 28 at Barrett Funeral Home 148 Dean Dr., Tenafly, New Jersey. As Walter was a cancer survivor of 30+ years, the family has asked that donations please be made in his name to Memorial Sloan Kettering Cancer Center’s Research (MSKCC): https://secure2.convio.net/mskcc/site/Donation2?idb=2022767553&df_id=13852&mfc_pref=T&13852.donation=form1

Walter Berman passed away on October 3, 2019 at 98 ½ years young surrounded by three generations of the family he created. He was known as Dad, Grandpa, Papa (Great-Grandpa), Uncle, Brother, Brother-in-Law and Family Patriarch. He is survived... View Obituary & Service Information

The family of Walter Berman created this Life Tributes page to make it easy to share your memories.