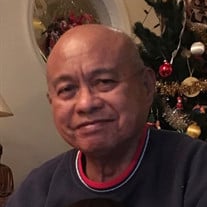 Warlito Rabanal Ragasa, M.D. died on March 19, 2020 in Orlando, Florida at age 75. Born to parents Mariano Ragasa and Eugenia Rabanal Ragasa in San Juan, Ilocos Sur, Philippines, Warlito, known to many as Lito, attended Manila Central University and was conferred a Doctor of Medicine degree in 1970. He emigrated from the Philippines and first landed in Canada then moved to New York City in 1973. In 1977, Lito eventually settled in Englewood Cliffs, New Jersey where he lived with his wife and raised two children. Lito proudly became a naturalized U.S. citizen. A dedicated physician for over 40 years, Lito worked as an Attending Anesthesiologist in the following New York City hospitals: The Brooklyn-Caledonian Hospital, St. John’ s Episcopal/Interfaith Medical Center, Union Hospital, St. Barnabas Hospital, and Kingsbrook Jewish Medical Center. Lito was a devoted family man who worked tirelessly to support not only his wife and children but also the educational paths and career endeavors of various siblings and relatives from the Philippines. He was an avid sports fan who followed all the New York/New Jersey teams. He also volunteered as an usher at the family’s home parish, Saint Cecilia’s Roman Catholic Church in Englewood. Lito was preceded in death by his parents, Mariano and Eugenia, and his brother, Jesse. He is survived by his wife of 46 years, Lucy, his son Robert and his wife Zoe, his daughter Christine and her husband Duraid. Beloved “Lolo” to his grandchildren Porter, Selwyn, Hadley and Leonardo whom he adored. Brother of Nenita Ragasa Benedito and her husband Phillip, Wilfredo Ragasa and his wife Shirley, Corenelio Ragasa and his wife Perry, Benedicto Ragasa and his wife Lilia, Maria Frelan and her husband Fredy. Godbrother to Emma Orian and “Daddy Ninong” to Rachelle Orian Flamio and her husband Costi and their children Lala and Max. Interment will take place privately at George Washington Memorial Park in Paramus. In lieu of flowers, donations in his name to the National Kidney Foundation, 30 East 33rd Street, New York NY 10016 will be appreciated by the family.

The family of Warlito Rabanal Ragasa M.D. created this Life Tributes page to make it easy to share your memories.