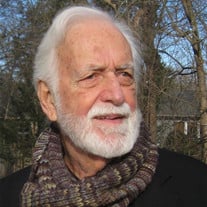 Willy J. Malarcher of Englewood, NJ, 90, died peacefully surrounded by his family on February 25, 2019. Born in New Orleans, LA, to James W. and Lilian Hart Malarcher, he was the fifth child of six. Surviving are Patricia, his wife of 60 years, his son Paul Malarcher (Sammi Sherwin) and daughter Maura Malarcher. Willy was an artist with an independent business as a liturgical design consultant. Influenced by early exposure to the festive character of sacred and secular rituals in New Orleans, Willy had a lifelong interest in the integration of art and religion. His observation that much of what is seen in museums was originally meant for houses of worship prompted him to wonder why so few contemporary churches include the art of our time. After the Second Vatican Council introduced changes that updated Roman Catholic liturgies, Willy primarily devoted his professional life to designing environments reflecting those changes. Willy’s designs for new and renovated worship spaces won awards in several competitions sponsored by the AIA or liturgical organizations. His most recent project was the Shrine of Blessed Miriam Teresa at the College of St. Elizabeth, Convent Station, NJ. Other New Jersey projects include Our Lady of Mercy Church in Park Ridge and chapels at St. Joseph Medical Center in Paterson, Holy Name Medical Center in Teaneck, and the monastery of the Poor Clares in Chesterfield. Design projects in New York include St. Anastasia Church in Douglaston, St. Bernard’s Church in Saranac Lake, chapels for the Dominican Convent in Sparkill, Carmelite Monastery in Beacon, and Murray Weigel Hall at Fordham in the Bronx. He also worked on an interior renovation at Park East Synagogue in New York City. St. Thomas More Church in Sarasota, FL; St. Mary’s Church in Kutztown, PA; St. John’s Episcopal Church in Johnson City, TN; and a design for an aircraft carrier chapel for the US Navy were among his other projects. With a grant from the Raskob Foundation, Willy went to Ecuador to design an interior renovation for the Cathedral of Puyo that drew from elements in the indigenous culture. Published writings by Willy include a statement on “Hospitality” for The New Dictionary of Sacrament Worship edited by Peter E. Fink, S.J. and several articles on environment and art for Modern Liturgy magazine. Willy was a member of the North American Academy of Liturgy. Prior to starting his business, Willy & Group, he worked at the Rambusch Decorating Company in New York City (1962-1977); the Division of Planning, City of Buffalo (1961-1962); and as an instructor in art at Daemen (then Rosary Hill) College, Amherst, NY (1958-1961). Willy exhibited his personal artwork in several solo and two-person shows in galleries and in group shows at museums including the Albright-Knox Gallery, Buffalo; the DeCordova Museum, Lincoln Park, MA, the Metropolitan Museum of Art; the Hunterdon Museum, Clinton, NJ; and the Newark Museum, which purchased one of his drawings for its permanent collection. Ordained a Permanent Deacon for the Archdiocese of Newark in 1975, Willy ministered at Holy Name Medical Center, Teaneck, NJ until 2017. Willy graduated from Centenary College, Shreveport. LA (BA, 1954) and the Catholic University of America, Washington, DC (MFA, 1958). After high school at Loyola College Prep in Shreveport, LA, Willy attended the New Orleans Academy of Art. He served in the US Army at Fort Bliss, TX (1954-1956). Donations may be sent to the Holy Name Medical Center Foundation—Pastoral Care. Memorial Service will take place Saturday, April 27, at 11 AM at Our Lady of the Rosary Chapel 175 Route 340 Sparkill, NY 10976 Willy designed the worship space in this contemporary building. The Main Phone number at Dominican Convent is 845-359-4199. Buses from Manhattan: Uptown GWB Bus Station would be 9/9A to Sparkill CoachUsa https://web.coachusa.com/rockland Midtown Port Authority would be 9T/9AT Sparkill From the Sparkill stop we are about a mile away. There is a Local bus TOR 92 that may be able to take your guests closer. We are located directly between Thorpe Village (stop 10) and St. Thomas Aquinas College (stop 11) rocklandbus.com

Willy J. Malarcher of Englewood, NJ, 90, died peacefully surrounded by his family on February 25, 2019. Born in New Orleans, LA, to James W. and Lilian Hart Malarcher, he was the fifth child of six. Surviving are Patricia, his wife of 60 years,... View Obituary & Service Information

The family of Willy Malarcher created this Life Tributes page to make it easy to share your memories.